Two years ago I was employed to participate in a pilot project dedicated to researching fragments of medieval manuscripts at the university library of the University of Southern Denmark in Odense. My job was primarily to identify those liturgical fragments that had been discovered in the books once belonging to Herlufsholm School, an institution founded in the town of Næstved on Sjælland in 1565.

One of the books presented a particularly challenging case, namely Herlufsholm 534.11. As can be seen below, the spine has been strengthened by six strips of parchment - one of which had fallen off - as well as a loose fragment strip that is currently attached to the binding (not pictured). My colleague and I could identify this as having belonged to a liturgical manuscript thanks to the notation, but this was as sure as we could be about anything when we began our inquiries. 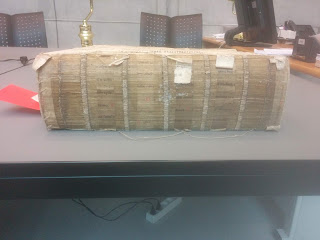 The main problem was that with the exception of the two fragments at either end of the spine (about which I have written here and here), the manuscript had been cut vertically. On the one hand, this has provided us with a better sense of the original folio layout and the length of the texts. On the other hand, it meant that the individual fragments contained many incomplete words. This is a major issue when it comes to identifying such chant texts, because identification is often done by searching liturgical databases, such as the Cantus database. In order to use these search engines, it is important to have at least one complete word, and preferably more than a conjunction or preposition, in order to avoid wading through large quantities of material. And because Latin words have various endings depending on their grammatical clause, it makes a huge difference to be able to ascertain whether a word ends in the nominative or the accusative clause, for instance. In the case of the fragments of Herlufsholm 534.11, this grammatical information was often absent, either because the beginning or the end of the word had been cut off, or because of smudges or wear had made some letters illegible.

I have been working on these fragments on and off since this pilot project, always returning in the hope of teasing out some more information, and hoping that with some time away from the matter my eyes will be able to detect new details. Thankfully, this method has paid off. In the past month, I have twice returned to my images of the fragments as a way to distract my brain from various tasks, and this has yielded some breakthroughs that has changed my understanding of the fragments, and allowed me to fill in some important gaps. The second of these revelations came only two days ago.

Presently, I'm still systematising the information that has been gleaned from the recent revelations, and consequently there are still many things I'm leaving unsaid until I'm able to present my findings in a more coherent way. This blogpost is more as a way to express my excitement, and to provide an idea of why these particular fragments have been so challenging. I therefore hope the reader will forgive me for being a bit coy about the details.

But in order to illustrate the significance of the recent breakthroughs, I present you with the picture below. This shows the upper part of one of the fragments, showing the side that faces inward against the spine. The text on this side of the fragment is now completely lost to us, and all that remains are these letters, letters so difficult to read that I had since the very beginning of my work discarded all hope of teasing out their meaning. However, thanks to this week's revelation, I have been able to compare it with texts from some of the other fragments, and I now know that the text below reads "potuque dignas", and that it comes from a sequence for the feast of Easter Wednesday (Cantus ID: ah53050). In the microcosm of these fragments and my research on them, this is terribly exciting, and I hope to be able to share more details anon. 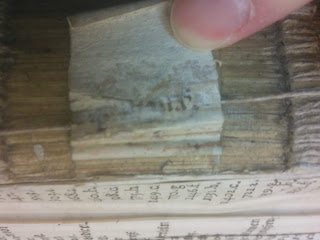