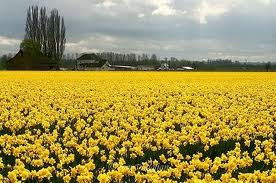 "Ten thousand saw I at a glance"
Last week I revealed to my readers some of the many exalted positions I occupy, and this week I announce another: I am a Co-Chair of the Grounds Committee of the Gray Farm Neighbors Association. The residents of our lakeside tract in Princeton Township share ownership of ten or fifteen acres of meadows and woodland. For the Grounds Committee the main tasks in tending the Common Ground are beating back the jungle and cleaning up storm damage, but we strive also to do some actual landscaping. In its third year, my scheme of mass bulb planting has begun to pay off, and in particular we have a spectacular show of daffodils and narcissi along the paths next to the lake. 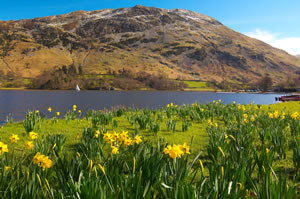 Unfortunately I can show you no photograph, for blog day has arrived precipitate in a double sense. It hardly matters, though, since you can capture the essence of the scene perfectly by looking at the most famous water-side daffodils in the world, those above Ullswater in the Lake District in England. The divine Creator gave them their beauty in time immemorial; William Wordsworth gave them their fame in 1804 with the following poem.

I WANDER'D lonely as a cloud
That floats on high o'er vales and hills,
When all at once I saw a crowd,
A host, of golden daffodils;
Beside the lake, beneath the trees,
Fluttering and dancing in the breeze.
Continuous as the stars that shine
And twinkle on the Milky Way,
They stretch'd in never-ending line
Along the margin of a bay:
Ten thousand saw I at a glance,
Tossing their heads in sprightly dance.
The waves beside them danced; but they
Out-did the sparkling waves in glee:
A poet could not but be gay,
In such a jocund company:
I gazed -- and gazed -- but little thought
What wealth the show to me had brought:
For oft, when on my couch I lie
In vacant or in pensive mood,
They flash upon that inward eye
Which is the bliss of solitude;
And then my heart with pleasure fills,
And dances with the daffodils.

Anybody who reads poems at all has probably read this one. It is justly famous, despite some pretty awful lines, such as

I gazed—and gazed—but little thought
What wealth the show to me had brought.

In chasing a pedestrian rhyme Wordsworth leaves huge, muddy bootprints all over the natural syntax of the English language, completely abandoning, incidentally, the noble theory he and Coleridge laid out in the “Preface” to the Lyrical Ballads: “The Poet thinks and feels in the spirit of human passions. How, then, can his language differ in any material degree from that of all other men who feel vividly and see clearly?” Well, by the verb to the end of the sentence artificially postponing, that’s how. Still, the inward eye…the bliss of solitude is pure gold, like the daffodils themselves.

The line that makes the poem unteachable today, though, is not Wordsworth’s fault:

A poet could not but be gay,
In such a jocund company

This now elicits titters or guffaws. But the sexual meaning of gay, today nearly universal, is a mysterious neologism. Wordsworth had never heard of it. It is furthermore incoherent. If homosexuality is gay, heterosexuality should be morose. Instead, oddly, it is straight, in which case…

But I learned long ago, in my very first job, that the Romantic Poets were unlikely to survive modern undergraduate sexual obsessions. The moment of truth came in 1963 at the University of Wisconsin in Madison, in a freshman literature survey populated largely by fresh-faced, blue-eyed, blond-haired young women called Karen, from someplace called Fond du Lac.

We read Wordsworth’s “Lucy” poems, and I assigned a short paper on one of the best known of them, “Strange Fits of Passion Have I Known”. In this poem the poet-lover sees his girlfriend’s house by moonlight and has the irrational apprehension (“strange fit of passion”, indeed) that she might lie dead within it. As the rider passes the house, the moon sank low upon it.

And now we reached the orchard-plot;
And, as we climbed the hill,
The sinking moon to Lucy's cot
Came near, and nearer still.

Well, I was home one Saturday night grading papers, just beginning to nod, when I came to one that made the hair on the back of my neck stiffen. One of the fresh-faced Karens from Fond du Lac had written a psycho-sexual interpretation of the poem that probably deserved an X-rating but might have squeaked through with a strong Parental Guidance Advisory. For both Wordsworth and Karen had been victimized by philological vagaries over which they had no control. 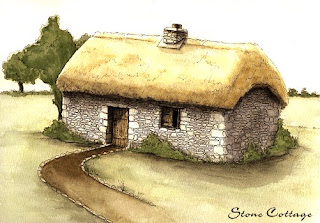 There was a perfectly good Old English word cot, meaning a modest house, a humble dwelling. Eventually it was replaced by cottage, but it survived well into the nineteenth century and survives still in various place names and compounds such as dovecote. Meanwhile there had been a distantly related old Sanskrit root *khatva, generally suggesting narrowness or constriction, which in a later Prakrit became khat, meaning a most useful piece of portable furniture so characterized—to wit, a camp-bed or cot. The Brits brought back this useful thing, and the useful word denoting it, along with other Indian treasures such as umbrellas and Darjeeling tea. Gradually the Indian homophone hogged the whole space formerly occupied by the Old English word.

Karen (from Fond du Lac)
For Wordsworth the cot was his girlfriend’s little house, viewed distantly as a dark exterior--and nothing more. And why should Karen from Fond du Lac think that the cot was anything else than, well, a cot. I have to admit that it definitely spices up a rather lugubrious poem if you think that it is all taking place in bed—sort of Wordsworth Vindaloo.

William Wordsworth (from the Lake District)

SEMI-SUNSHINE ADDENDUM  3PM ET 20 April 2011
Some weak sunshine has appeared, allowing me to give an impression of what this post was supposed to be about--the show of daffodils on the Gray Farm paths above Carnegieswater. 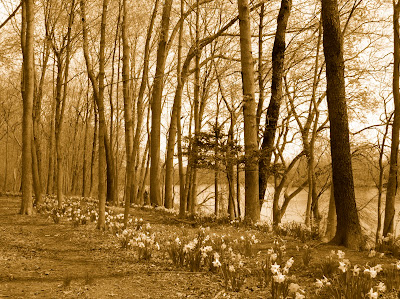 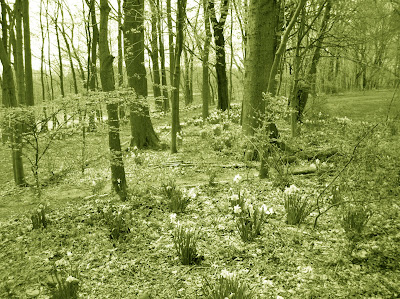