Voices Of The Page 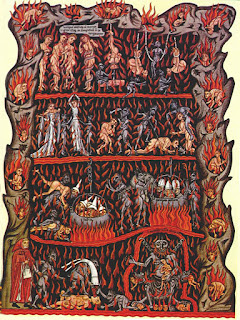 
In his viral rampage throughout the world, apparently making special exertions in our own native land, the Grim Reaper has not abandoned what might be called the normal rhythms of mortality.  Two more of my friends, both eminent scholars and one of them a close kindred spirit, have died within the past two weeks.  Covid was not the immediate cause of death in either instance, but the generalized sense of Covid gloom and constriction exacerbates all mourning even as it forbids its palliating rituals.  One of the turning points of old age comes with the somber realization that most of one’s youthful companions, classmates, close professional colleagues, siblings perhaps, other dear relatives certainly, are now gone.  Giles Constable, former Director of Dumbarton Oaks and long-time senior member of the School of Historical Studies at the Institute for Advanced study, was one of only two close friends with whom I have co-taught courses.  I can hear his rich, reverberating voice in my spiritual ear as I write this.  In Latin voxmeans both voice and sounds voiced, words, utterances, accent.  Medieval writers sometimes call words voces paginis, the voices of the page.  It is a beautiful thought that in old books we can still hear the voices of old friends, including some we actually knew.  It was with  this thought, amidst the gloom, that I took down from my library shelf two big, beautiful volumes that are among the marvels of twentieth-century humanistic scholarship.

Toward the end of the twelfth century, which is to say somewhat more than 800 years ago, an enterprising and learned German nun in Alsace conceived, commissioned, and supervised the production of a very remarkable book intended for the edification of the young sisters in the Cistercian house of which she was the abbess.  Her name was Herrad of Landsberg, or of Hohenbourg, the site of the religious house over which she presided.  The religious site is known also as Mont Sainte-Odile.  (Odile is a slightly iffy Alsatian saint of pre-Carolingian times, especially helpful to those who read a lot, the saint for sore eyes.)  Herrad’s  book was a huge biblical and theological encyclopedia.  She entitled it Hortus deliciarum, The Garden of Delights.  It was remarkable for several reasons.  In the first place it was a learned work directed by a woman with females as its intended readers.  It was strikingly ambitious in its range of subject matter, anthologizing the disparate works of many famous theologians and exegetes, several of them from the twelfth century, meaning essentially the “latest word” in monastic learning.  Finally, the work was lavishlyillustrated, or perhaps one should say lavishly pictorial, as the verbal texts and pictorial images collude in a shared pedagogic enterprise.  One incidental feature of the book has been very important to Germanic philologists.  The Hortus was of course written in Latin.  But Herrad’s mother tongue, and that of most if not all of the nuns under her supervision, was German.  The book contains more than a thousand vernacular glosses, or subsidiary vernacular translations, of words or phrases meant to help a reader whose Latin might not yet be perfect.  These are precious materials for scholars of the earlier forms of German.  It was a huge book on large, heavy vellum sheets, and it must have been very expensive to produce. 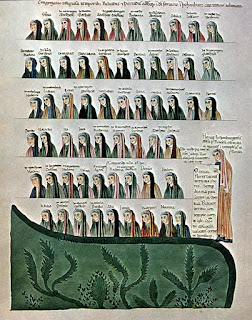 I have had to employ all these sad preterits because the manuscript is no more.  In 1870 there was a short but brutal conflict, the Franco-Prussian War, a sad presage of the Great War that would consume most of Europe not half a century later.  The precious Hortus deliciarum, which had survived so many dangers and dislocations during the centuries—the Protestant Reformation and its attendant religious violence, the decline of monastic life in France, the neglect of secular scholarship, above all the systematic anti-religious fanaticism of the French Revolution—perished when the library in Strassburg was destroyed by artillery bombardment.  If you know even a little about medieval manuscripts and think about it for a moment, it’s really a miracle and perhaps yet another demonstration of the existence of a divinity that any of them have survived, let alone the thousands we luckily still have. 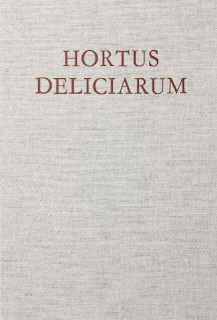 About forty years ago a team of medievalists, after many years of painstaking labor, was able to bring out a stunning two-volume reconstruction of the Hortus deliciarum,*a feat hardly less astonishing than Jesus’s raising of Lazarus, and of similar genre.  These were the two volumes I took down from my shelves.  To reconstruct a huge manuscript of more than 300 folios was an audacious enterprise requiring a team of experts in codicology, medieval theology, and Latin and German philology.  It could not even have been undertaken were it not for the labors of two nineteenth-century enthusiasts working  before the Age of Photography.  A serious German medievalist, C. M. Engelhart, who published a study of Herrad in 1818, made many transcriptions and tracings of the pictures in the manuscript.  An aristocratic French antiquarian, with (for English readers) the somewhat startling name of the Compte de Bastard, who began studying the manuscript in 1840, made or had made a great many more.  Many of the copies attempted to reproduce color schemes.  A few other scholars had from time to time copied out some of the Latin text or described illustrations. So the materials for a plausible reconstruction were there, though any such project would require both textual and iconographic erudition, informed intuition, and some good luck.

Two of my close friends were members of the team.  Dr. Rosalie Green, the Director of the Index of Christian Art, was the group captain, so to speak,  and the principal editor.   The Hortus was in a sense her life’s work.  She had first started pondering the possibility of resurrecting Herrad’s legacy during her graduate years in Chicago.  Some of the happiest times of my own early career were spent working at the Index.  Ms. Green was a rather private person, and after her retirement in 1981, after thirty years as Director, she became almost reclusive.  I saw far too little of her in her last years.  She died in 2012 at the age of 94.  Michael Curschmann, who was by three months my senior, was one of the leading experts of medieval art and literature of his generation.  The body of work he left behind is destined for permanent significance.  Even more important, from my point of view, was our personal friendship.  Our regular lunches were for decades nearly a weekly feature and became even more meaningful in our retirement years.   He and his wife Beryl, an accomplished potter who had been born and raised in Wales, were among our dearest family friends.  She died suddenly in 2013.  Four years later, while I was away lecturing in the Midwest, Michael died with equal suddenness, in his home alone.  The old church litanies contain a clause seeking protection against sudden death.  Its basis was the old belief that the dying person needs time for careful penitential preparation.  But as most of us must at one time or another learn, sudden death is actually a grievous assault on the living, who are often left with an inner sense of irreparable loss, of things done or undone, things said or left unsaid.  What is one to make of the statistics we read daily in our papers?  Well over two million Covid deaths worldwide, and invisible behind each and every digit grieving relatives, friends, associates, acquaintances, or mere fellow human beings. 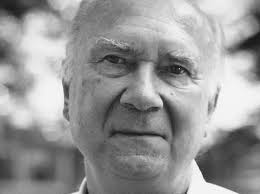 The reconstructed edition of the Hortus deliciarum is not light reading.  It is a large, structurally complex scholarly work dense with Latin theological texts and heavy with learned footnotes in foreign languages and technical bibliographical notations.  Like all encyclopedias, it is a reference work, a highly specialized one, not something to take to the beach.  Its intended audience is pretty specialized: scholars of medieval literature and art.  Herrad's original audiene was yet more specialized: about sixty Cistercian canonesses.  Even so, leafing through the introductory essays, I could from time to time distinctly hear, rising above the decorous, dignified hum of the academic prose, the distinctive voces paginis of two old friends, still resonant from the grave.  Milton famously said that "A good book is the precious life-blood of a master spirit, embalmed and treasured up on purpose to a life beyond life."  I have always thought that what he must have had in mind was the book's content or ideas.  The phrase "life beyond life" is of course ambiguous.  The immortality would seem to be that of the work rather than of the worker, as when Pope thus praises the Aeneid: "When first young Maro in his boundless mind / A work t'outlast immortal Rome design'd..."  But what I could at times hear so clearly in the voices of the pages of academic tomes many would regard as dry-as-dust were two old friends.  That was quite a comfort in a season of Plague.

This post is actually a digression of sorts.   I started out to write about something in a short tale of Guy de Maupassant, whose most famous story may well be “Boule de Suif,” which is in part about the beastliness of the Germans in the Franco-Prussian War.  One form of beastliness reminded me of another: the bombardment of Strassburg in 1870, and the destruction of the Hortus deliciarum.  I’ll try to get back to de Maupassant next week. 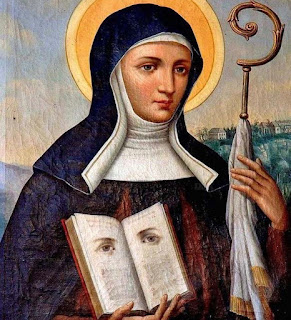 Keep your eyes on Saint Odile