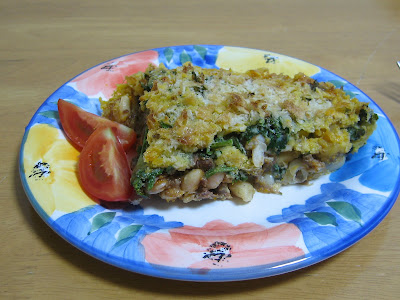 Many visitors to [Paula Wolfert's] site are familiar with Moroccan tagines---stews of meat, poultry, or fish smothered with one or two vegetables or fruits, cooked in an earthenware dish with a conical cover.

So begins leading Mediterranean food writer Paula Wolfert's introduction to this exotic meal-in-one dish that shares virtually nothing in common with its namesake stews from neighbouring Morocco. While both may start with a rich stew, the Tunisian version takes it to a whole different place with a topping of parsley (in this case), egg and cheese that's baked into a frittata-like crust. So that's meat, beans, veggies and dairy--and a breadcrumb topping for good measure--all rolled into one. Different, indeed!

You could say I made this dish as an excuse for trying out the cinnamon and rose mix that is Tunisian baharat. I had some dried rosebuds (purchased from Ohtsuya in Ueno, Tokyo) that wanted using, so I whipped up a batch of 2 parts cinnamon, 2 parts rosebuds and 1 part black pepper. The original recipe calls for one part of each, but Paula's doesn't include pepper, so I cut back a little (g). Although Paula mentions rubbing the rosebuds through a sieve, I found this, and going at them with a mortar and pestle, virtually useless. My handy dandy new spice grinder made short work of it, though. The resulting blend was quite sweet smelling, so I was interested in how this would taste.

In the original recipe, Paula has us mixing the stew with the egg, parsley and cheese mixture and baking the whole thing as one, but I thought it would be nicer to have it in two layers. If you go that way, make sure to salt the stew, as all the seasoning is in the cheesy half otherwise.

And how did it taste? Well, I quite liked the egg and parsley topping, which fairly oozed cheese (in the best way, of course (g)), but would definitely recommend you use flat-leaf parsley rather than curly (which was all I could get on the day). I wasn't so fond of the baharat in this particular dish, or maybe it was just the cinnamon. (The mix is brilliant on stewed apples, though, pepper and all.) My dear Iranian friend Hw gave this the thumbs up, but the Young Man reckoned it tasted better cold for lunch the next day. So the results were mixed at this end.

I don't think I will do this particular version again, but I am intrigued enough to find out what else Tunisian cuisine has to offer, so I might get Paula's Mediterranean Cooking at some point, even if it means mucking about with pounds and ounces and other such things we metric people are illiterate about. That's basically the only reason I haven't bought her Couscous & Other Good Food From Morocco yet, though I suspect it is the seminal work on one of my favourite cuisines.

I've altered the recipe for metric and the pressure cooker and for layers. I also used beans I had cooked and frozen myself. You can refer back to the original recipe from the link above.

1. Toss lamb with salt and pepper.

2. Heat 1 1/4 tbsp oil in a small pressure cooker. Cook the onion until translucent, add the meat, and saute for 5 minutes. Cover and cook over low heat until the meat gives off its moisture and reabsorbs it. Add the tomato paste and cook, stirring, until lamb cubes are well coated. Add cayenne and about 1 cup of water. Cover, bring to pressure and cook over a low heat for 10 minutes longer, or until the meat is fully cooked and the juices are thick. Stir in beans, check seasoning and remove from the heat and allow to cool. (Up to this point the dish can be made 1 day in advance. Return to room temperature before proceeding.)

3. Place the oven rack in the second highest position and preheat the oven to 200 degrees C.

4. In a mixing bowl, combine 1/3 cup of the bread crumbs, grated Parmesan, and cubed Gruyere, mixing well. Season highly with salt, pepper, and sieved baharat. Beat the eggs to a froth and add to the mixture.

5. Use the remaining oil to coat the bottom and sides of a 5- or 6-cup (1-1.2 l) baking dish, or an attractive23 cm well-seasoned oven proof skillet. Layer the lamb on the bottom of the dish and cover with the prepared mixture, sprinkle with reserved bread crumbs and set in the oven to bake for 12 minutes. Raise the oven heat to the highest setting, remove the tagine from the oven, tilt the dish so that the oil collects in one place, then brush this oil over the surface of the tagine. Return the dish to the oven and bake for 8 minutes. Serve hot or at room temperature from the dish. [S: Don't forget the lemons (g).]