The Terminator: A Boy And His Robot 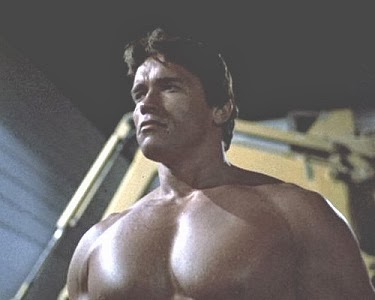 I saw The Terminator (1984) during my horrible year at Hell-fer-Sartain State College in Houston, Texas, the most horrible place in the world.  So the post-apocalyptic horror plotline didn't seem that bad...

The premise: evil computers take over the world and try to destroy all humans.  John Connor rallies the survivors and destroys them.  So they decided to send a cyborg with an Austrian accent (Arnold Schwarzenegger) back to 1984 Los Angeles, to kill John's mother, Sarah Connor, so he will never be born.  John counters by sending one of his soldiers, Kyle, back in time to protect her. 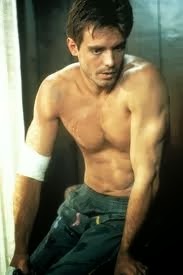 The main gay connection is the intense beefcake.  Both the Terminator and Kyle (Michael Biehn, left) appear in the 20th Century naked -- we see muscle, back sides, and even Arnold's swaying penis. There's a lame explanation that time travel requires nudity -- one that I've never heard of in any time travel story I ever read.  Director James Cameron just wanted naked male bodies displayed on the big screen.

Later Sarah's roommate's boyfriend Matt (bodybuilder Rick Rossovitch, below) has a nude sex scene, and then fights with the Terminator clad only in bikini-brief underwear.  The Terminator gets naked again.  Kyle takes off his shirt.  The beefcake goes on and on.  (There are also a few glimpses of Sarah's breasts, but this movie is definitely geared toward the male body). 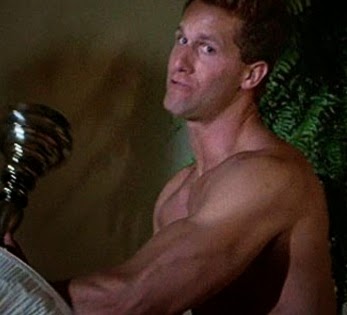 With all the beefcake, it is rather shocking to find an utter lack of same-sex romance, friendship, or cordiality, just seething, posturing, and shooting. But Sarah is surrounded by men who love her:
1. Her roommate's boyfriend Matt
2. When she seeks refuge at the police station after discovering that someone is killing all the Sarah Connors in town, a mother-hen cop (played by gay-in-real-life Paul Winfield).
3. Kyle, who falls in love with her.

This is heterosexism writ large.  The only hint of gay subtext comes when Kyle describes John Connor in the future: he's big, bold, and handsome; "he has your eyes"; "I would die for him."  Sounds like Kyle has a little crush on John.

But then we discover that his sexual dalliance with Sarah has resulted in a pregnancy; he's the biological father of his future commander.  The warmth he describes is paternal, not romantic. 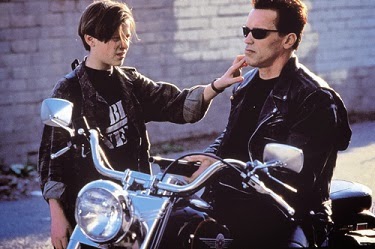 The sequel, Terminator 2: Judgment Day (1991), contains less nudity, but a lot more gay subtexts.  In the first scenes, the 12-year old John Connor (Edward Furlong) goes around with a boyfriend (Danny Cooksey), and then he gets a blatant crush on the new, good Terminator (Arnold); he literally can't keep his hands off the hunky cyborg.  Sarah goes out of her way to explain this, too, as paternal, not romantic.

I'm not buying it.  The boy all but rips the Terminator's clothes off.