I like to have our Christmas pies before Christmas dinner as a sort of welcome-to-Christmas thing. You never know if some of your guests may be late (though this hasn't happened yet in Japan), or perhaps the turkey wants more cooking than anticipated (not this time). Or maybe the cook just needs more time to get it together in the kitchen without having her guests starve to death (highly likely (g)). Anyway, who has room for them after Christmas pudding in any case.
To welcome G and M this year, we had these scrummy little pies and pomegranate cocktails.
I use Nigella Lawson's pie idea, making the dough up with orange juice instead of water, and adding various goodies to a bought jar of mincemeat (Robertson's, of course) in good time.
I was a bit worried about these and the Christmas pud, because an Iranian foodie had not only failed to see any connection with her own culinary heritage in these, she even declared them to be "vile". Ooops.
Well, I beg to differ! In fact my dear friend G even pronounced Christmas pudding to have a nostalgic taste for him. Perhaps he was just being nice, but he did have seconds of the pud, so it is not so disgusting to all Iranians, apparently (g).
Obviously I need to do some more research on this, though. If only I could remember where I first read about the fabled Persian connection... 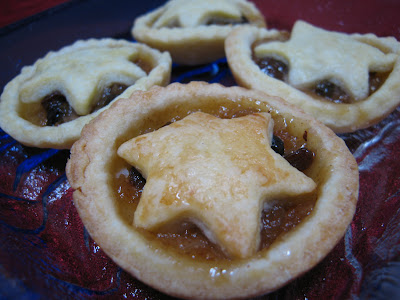 Stir together sometime in early December and keep in the fridge until needed.

240 g plain flour
120 g cold butter (or half butter, half lard)
Couple of tablespoons of cold orange juice with a pinch of salt added

Measure flour into bowl and add the cold fat, cut into 1 cm dice. Put this in the freezer for 10 minutes, then blitz in the food processor until the mixture resembles oatmeal. Tip into bowl and add orange juice one tablespoon at a time until the dough looks as if it is about to come together. Kneed very lightly and divide into two balls which you flatten and wrap in clingfilm and refrigerate for 20 minutes. Roll the dough to about 5 mm thickness and cut out circles and stars for the top.

Preheat oven to 200 degrees C. Use the circles to make the bases (I use a 6-hole muffin tin, making 6 at a time because I have a tiny Japanese oven). Fill each with a scant teaspoon of the mincemeat mix (it spreads in the oven) and top with a pastry star. Brush on some milk if you feel like it, and bake for 15 minutes or until a nice golden brown.

The original recipe for these called for pomegranate juice, but that is a sold here at a super premium price due to some health fad that is going on. I substituted pomegranate molasses and water, which gave the cocktails a rusty mud hue, but who cares about that when it tastes this good. I wonder what it would taste like if made as per instructions...

Bring the pomegranate molasses, water and cinnamon to the point of boiling. Reduce heat and simmer for 10 minutes. Allow the mixture to cool completely and refrigerate until needed.

To serve, place 1 or more tbsp of the pomegranate mixture in a wine glass and top up with apple lemonade. Garnish with pomegranate seeds.

For an alcoholic version, substitute dry sparkling wine for the apple lemonade. Alternatively, you could just use 1 tsp of straight pomegranate molasses instead of the cinnamony mixture. Either way, to your health!