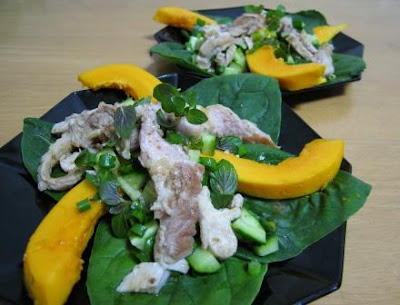 Chicken and papaya salad. So far not so inspiring... But don't let the workaday name put you off this one. It is a stellar recipe with lots of bright, bold flavours -- how does tamarind, ginger, mint and cumin grab you?! It's also a snap to put together after work as, even with all that taste going on, no marinating is involved. The Young Man and I gobbled this right up, and ended up eating what would have been our lunch for the following day. Next time, I'll make sure to make more!

Although I'd had my eye on this recipe for a while, I made it on the spur of the moment when I discovered premium papayas at my veggie shop. I had some spinach in the crisper, but it was looking a little ragged. But rather than chucking it out, I tried a new technique I learned on Japanese TV (which does have a very few redeeming qualities, after all) for reviving leaf veggies.

Basically, you soak your lettuce, spinach, or even strawberries, apparently, in HOT water (60 C) from the tap for 3 minutes, then rinse in cold water and use as normal. It is totally unintuitive, but having done the experiment myself, I can tell you it works! The miraculous reviving properties of hot water were discovered by the good ladies that make school lunches in Japan, after the government instituted a new rule requiring them to wash veggies in hot rather than cold water to prevent outbreaks of food poisoning. Way to go, ladies!

The original recipe uses betel leaves instead of spinach. I am not familiar with these, but everyone knows spinach.

This is another recipe from Marie Claire Kitchen, which is almost perfect but for the sizable chunk of the book that is given over to baked and other sweet goodies. As you may have guessed from the recipes I choose for this blog, dessert is not a big feature in the Saffron household... Then again, if the mood strikes me, some of the "afters" in this book might just be the ones to tempt me.

(Note that Australian tablespoons (20 ml) are used in this recipe. Add an extra tsp for each tbsp if using non-Australian measuring spoons.)

Mix the tamarind water, soy sauce, ginger, brown sugar , roasted cumin and chilli together in a large bowl and stir until the sugar has dissolved. Add the chicken to the dressing and toss it all together. Combine the remaining salad ingredients except the spinach leaves in another bowl and season.

Arrange the spinach leaves on a serving platter or 4 plates and top with the papaya salad and chicken. Top with any remaining dressing.