Shock Treatment: Romance Is Not A Children's Game 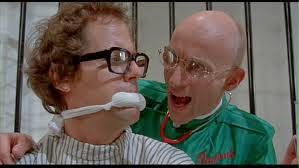 In the summer of 1981, I went to see Shock Treatment, which was widely advertised as "the sequel to The Rocky Horror Picture Show!"

Ok, so it starred Brad and Janet from the original movie, played by different actors (Cliff de Young, Jessica Harper).

And they're trapped.  Like many stories with gay symbolism, there is no way out.  This is the whole universe. 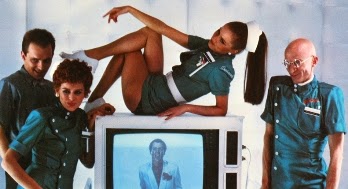 The story is a heterosexist fable: studio owner Farley Flavors is in love with Janet, so he hires Drs. Cosmo and Nations McKinley to institutionalize Brad in their psychiatric-hospital Faith Factory program.  To make Janet forget about Brad, they groom her to star in her own show.

Jessica Harper has a much stronger voice than Susan Sarendon, the original Janet.  Shock Treatment is worth watching just to hear her paeon to egotism, "The Me of Me"

Deep in the heart of me, I love every part of me
All I can see in me is danger and ecstasy
I'm willing to die for me.
One thing there couldn't be is any more me in me 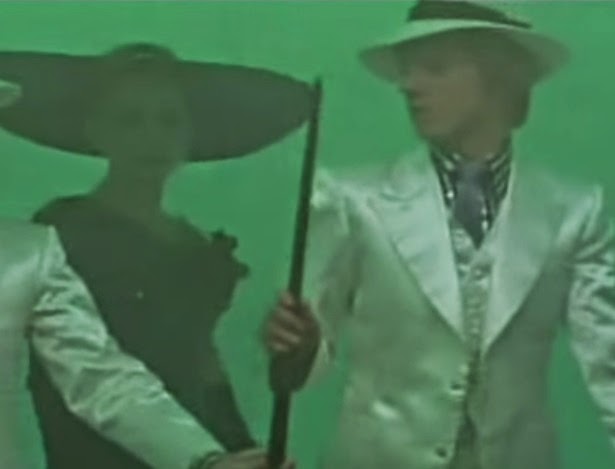 Or to feel the throbbing sexual energy as she walks through red-draped hallways and cruises "young blood."

The gay symbolism comes when the various couples prepare to bed down for the night.  Cosmo and Nation begin an SM game, with evocations of the danger of the "jump to the left" that comes with acknowledging one's same-sex desire.

Nation: What a joke.
Cosmo: What a joke!
Nation:  You feel like choking, you play for broke.
Cosmo: Romance is not a children's game.
Nation: But you keep going back just the same. 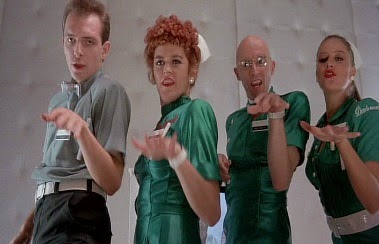 But even more evocative is "Look What I Did to My Id," in which the cast is in the dressing room, preparing for Janet's big debut, and hoping in vain that it will allow them the freedom to escape:

Cosmo and Nation: With neurosis in profusion, and psychosis in your soul.
Eliminate confusion, and hide inside a brand new role.

Ralph: This could take us to a new town nowhere near here.

I've used that line many times over the years.

The key to escape is not power, not love, but as in Rocky Horror Picture Show, desire, a passion that vitalizes, sets priorities, and makes life clear.

Judge Oliver Wright and Betty Hapschatt, suspecting a nefarious purpose behind the studio, hide in the rafters all night to investigate without being observed.  When they discover that Brad and Farley are twin brothers separated at birth, they break Brad out of the asylum, take him to confront Farley Flavors, and reunite him with Janet.  Then the four find a way out and exit into glorious sunlight while singing about sex: 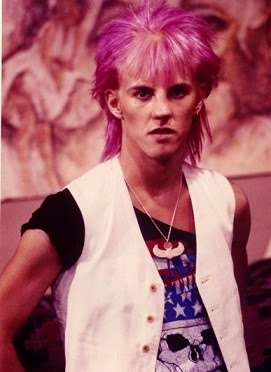 Not a lot of beefcake, although Gary Shail, who played the lead singer of Oscar Drill and the Bits (Janet's opening act), was somewhat attractive.  He also appeared in Quadrophenia (1979).