Today is the feast of Saint Matthew the Evangelist. According to his apocryphal acts, which became accepted as historical truth, Matthew was a missionary in Ethiopia. The foundation of this story appears to be an episode in the Acts of the Apostles where there is included a reference to Ethiopian Jews who were converted in Jerusalem during the ministry of the twelve disciples. The legend of Saint Matthew, however, has the apostle travelling to Ethiopia where he fights two pagan sorcerers who keep the kingdom under control with their powers. Matthew's ministry is ultimately successful, but as part of that success he is also martyred to serve as a witness of Christ to the burgeoning Christian community in Ethiopia. (For a brief reflection on the story of his death as represented in the Nuremberg Chronicle, see this blogpost.)

There is no historical foundation to the legend of Matthew in Ethiopia. It is likely that the Ethiopian Jews did indeed encounter Christianity at a very early point, as the Acts of the Apostles record, because Ethiopia, or rather, the Kingdom of Aksum, was part of a wider network of exchange in the first century CE and we are told from the Acts of the Apostles that Jews from many parts of the known world travelled to Jerusalem. Moreover, according to a more likely tradition, the royal family of Aksum accepted Christianity during the ministry of the Syrian missionary Frumentius, and Aksum thus became one of the two first kingdoms to convert to Christianity (the other being Armenia, also in the fourth century).

In the Latin Middle Ages, however, the conversion of Aksum was ascribed to Saint Matthew. And while Matthew's apocryphal acts were written down in a milieu where knowledge of Ethiopia was accessible, it is clear that whatever knowledge was available was also not applied to the legend. This owes in large part to the fantastical element of much of the early legends of the apostles, which partly can be ascribed to the tradition of the Greek novels where such fantastical details and exotic journeys were important elements. For instance, the apocryphal acts of Saint Matthew claims that the Ethiopian capital is called Naddaber, while the king who accepted Christianity was called Eglyppus. In reality, the capital was Aksum, which had given the kingdom its name, and the first Christian king was most likely Ezanas. The original version of the legend is now lost, but the story itself was firmly established in the Latin tradition and was recounted every year during the liturgical office for the feast of September 21.

In the course of my work on liturgical manuscript fragments, I have encountered an extract from the legend of Saint Matthew in a fragment form a Germany breviary, tentatively dated to the fourteenth century. This fragment is found in the special collection of the University of Southern Denmark, where I worked for a short period of time, identifying, transcribing and describing liturgical fragments. In the fragment from RARA Musik M 4, only the first lesson of the office for the feast day has survived, and this part only describes the prelude to Matthew's arrival in Ethiopia. For the feast of Saint Matthew, I will here share my transcription of this lesson, along with a rough translation of its content, and I have here marked the red initials of the original fragment to better highlight the shifts of the text. 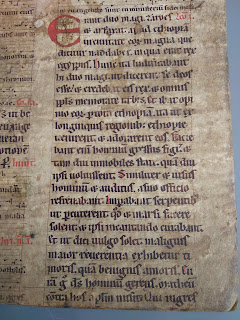 
My translation:
There were two magicians, Zaroes and Arfaxat, among the Ethiopians, in their great city which they call Naddaber in which was King Eglyppus. And so these two magicians sported, and called themselves gods, and the king believed them, and they were called as such by people of the entire city. And the rumour about them advanced through all of Ethiopia, so that from remote regions of Ethiopia they came and paid reverence to them. They made the feet of some persons transfixed and to stand immobile for as long as they themselves wished. Likewise they restrained the use of hearing and seeing in some persons. They ordered serpents so that they would strike and be accustomed to make weak those whom they themselves would cure by enchanting, and so the multitude is accustomed to show wicked fear greater reverence than kind love. Therefore, God sent the apostle Matthew as a cure to these people against those [magicians]. Who entering […]