Ruins Of A Great House


As most of you probably have noticed the UK is currently celebrating the sixtieth anniversary of Queen Elizabeth II's accession to the British throne, the so-called Diamond Jubilee. This celebration has caused much hullabaloo throughout the realm, and a friend in York could tell me that the Queen's face has been staring at her from shopwindows for weeks on end due to her visit to the city in April.

I am no royalist and I have no particular love for the British monarchy, but nor do I harbour any resentment against the Queen herself. I find there to be weighty arguments on both sides of the issue, so while I appreciate her role as a unifying factor in an increasingly devolved political unity, I also find this current recession to be a spectacular bad timing for expensive celebrations. In any case, I would like to obtain a t-shirt with the Queen's face on it just for shits and giggles.

This blogpost is, however, not intended to be about Her Royal Majesty, but about the British Empire which she has seen disintegrate steadily and relentlessly since the 1950s. The Empire, upon which the sun was said to never set, is a fascinating conglomerate that united a vast range of cultural currents that have become attached to a common centre in Britain. These bonds between mother country and colonies are still tangible in the post-colonial cultures. I for my part have noticed this particularly in literature and I have enjoyed the works of writers like Seamus Heaney, John Maxwell Coetzee and Derek Walcott as literatures straddling two worlds or inhabiting a mixed borderland where the colonial heritage still looms large. 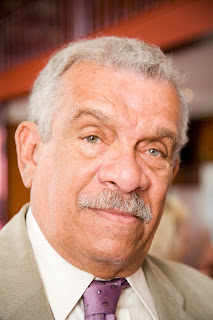 This is particularly noticeable in Derek Walcott's work, a man critical to post-colonial optimism and imperial Romanticism alike, and torn between his paternal white heritage and the black culture of his mother's side. One of his earliest printed poems expresses his view on the Empire quite beautifully, a poem using a decaying colonial villa as a metaphor for the Empire itself and titled Ruins of a Great House. I will share this with you, my readers, as a brief memento apropos the Diamond Jubilee, a work that encompasses both the colonial experience through its content and the culture of the Motherland by its epigraph. The poem was published in the collection In a Green Night. Unfortunately I do not have the rights to post the poem on my own blog, but the poem and an audioclip of Derek Walcott's own reading can be found here.