Norwegian History As It Never Happened - Or, A Lesson In Norwegian Particularism


I'm a medievalist, and I'm often reminded of why the study of history is important. To me it's about challenging grand narratives and comprehending human diversity, to unlock the vast complexity of human experience and to remind both myself and those around me that the past is not easily grasped and that we see history through a glass darkly. Historians are not here to bring comfort to those content with a simplistic view of times past and the historical progress. Historians are not here to sustain grand narratives, but to challenge them, to complicate them and, to the needful extent, to falsify them. That this is important is to me quite evident and I don't question this importance - nor do I need to, because I'm very often reminded why such constant revisionism is necessary.

To illustrate this necessity of historical studies in the manner of medieval didacticism, I want to present a very recent exemplum of historical misunderstanding. This took place on a Facebook page dedicated to my home place, a small village in the Western Norwegian fjords. There was an on-going discussion about the history of one of the place names, and during this discussion some very strange remarks about Norwegian history came to light, uttered by one of my fellow townspeople (henceforth called Mister G). His comprehension of the Middle Ages in Norway was wildly erroneous, and serves as a good example of the kind of historical misunderstanding that one can find when history is marked by a certain grand narrative. 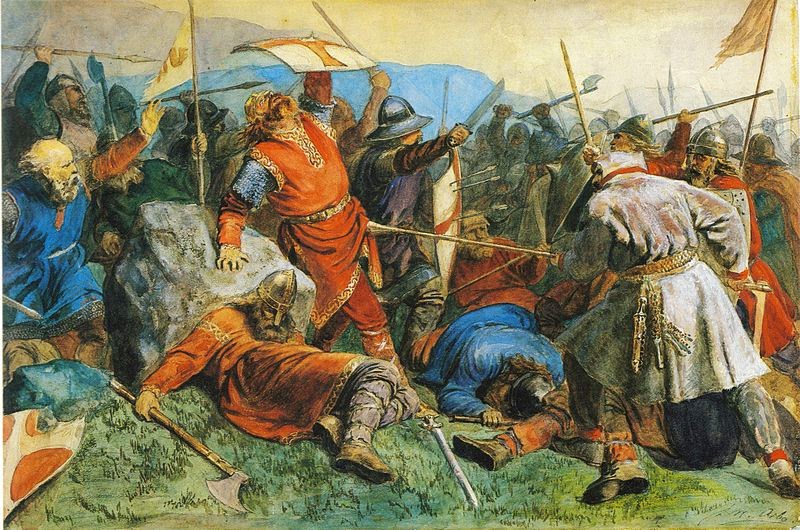 Olav Haraldsson's death at Stiklestad by Peter Nicolai Arbo (1831-92)This is one of the most important events in the old Norwegian grand narrativeFrom Wikimedia
The purpose of this blogpost is to present the way in which Mister G misunderstood Norwegian history, and to illustrate how much it is possible to be wrong about a historical period. In order to do so, I will first give a brief overview of twelfth-century Norway with a focus on the key points of the discussion I had with Mister G. Then I will present his version of Norway in the Middle Ages. The discussion took place on a Norwegian public forum, but I don't wish to mention names or to quote at great length, especially because the man in question will probably not be aware of this blogpost and can therefore not answer. The few quotes I translate, will only serve to emphasise a point of importance. 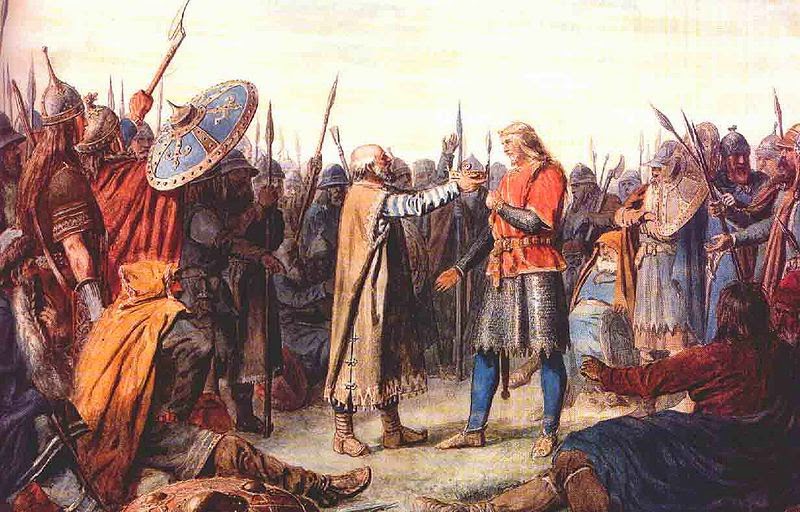 Olav Tryggvasson is made king of Norway by Peter Nicolai ArboOlav Tryggvasson is another iconic figure in the old Norwegian grand narrativeFrom Wikimedia
Overview of twelfth-century Norway
By the beginning of the twelfth century, Norway was a unified kingdom under its own kings. Ecclesiastically it was a part of the archbishopric of Lund together with Sweden and Denmark, which had been fairly recently separated from the archbishopric of Hamburg-Bremen. This was the case until 1152/53 when the the churches of Norway and Sweden were loosened from the archbishopric of Lund and organised under their own archbishops, respectively situated in Nidaros (modern-day Trondheim) and Uppsala.

Up until this time we know very little of the literary production in Norway. Sagas of Norwegian kings were being written in Iceland, although these are now lost to us. These works were written in Old Norse, then commonly referred to as the Danish tongue, with the Latin alphabet brought to Scandinavia by missionaries at some uncertain time. Runes were also used for shorter messages, and these were common all over the Norse world, including parts of England where Norse influence was strong.
The first Norwegian literature has been conjecturally dated to the early 1150s, and the first work is believed to be a Latin hagiographical account of Olaf Haraldsson, the saint-king who died at Stiklestad and who was the patron saint of Norway. Shortly after, probably in the 1160s, the first Norwegian Latin chronicle was written, Historia Norwegie, and towards the end of the century we also find books in Old Norse written in Norway. One of these is a history of Norwegian kings called Ágripor Extractsby modern scholars, which is likely composed c.1190. Another one - often referred to as our oldest book - is the Old Norwegian Homily Book, written c.1200, containing a number of homilies, most of which appear to be translations of Latin texts. Although these texts were written in the vernacular, there were only small differences - so-called Norwegianisms - that made them distinguishable from texts produced in Iceland or Denmark, for instance.

Much of Norway's history in the twelfth century was marked by civil strife as various pretenders to the royal throne fought each other. Towards the end of the century, Sverre Sigurdsson reigned the kingdom after the defeat of King Magnus Erlingsson in Nidaros. King Magnus had been supported by Archbishop Eystein Erlendsson (governed from 1161 to 1188), and because of this there were periods of conflicts between Sverre and the ecclesiastical powers. This resulted in Eystein's exile in England (1180-83) and the exile of his successor Eirik in Lund (1190-1202). For this policy, Sverre was excommunicated by the pope.
This very brief survey covers the main points about which Mister G harboured a severe misunderstanding. His own version of events follows suit. 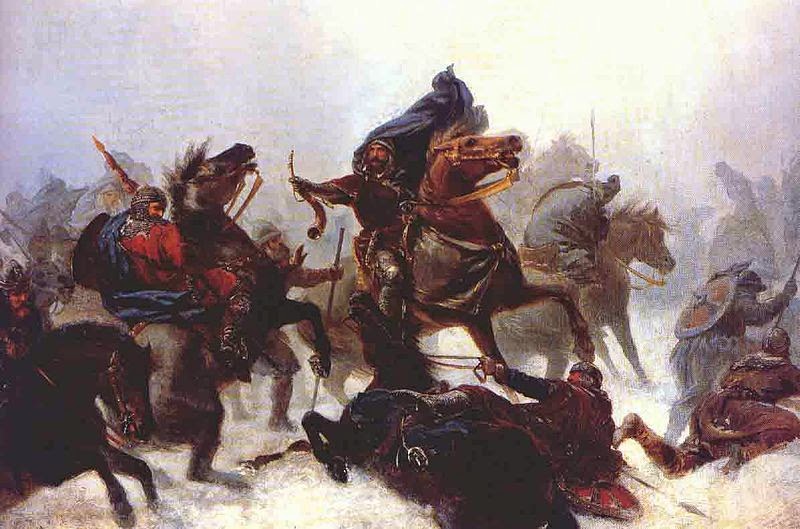 The underlying concern that sustained Mister G's version of Norwegian medieval history, was Norway's exceptional place in the history of Scandinavia. His first historical claim in the debate was that Norway had its own written language around 1120, "200 years before Sweden and Denmark". He went on to say that all people of knowledge - presumably about the written word - and all the writings disappeared during the Black Death.

This is, as we can see from the survey above, spectacularly wrong, and I challenged him on these points, pointing out that Norway shared a written language with the rest of Scandinavia, and that we had a Latin literature. I did not, however, press him on the particularism evident in his remark that Norway was two centuries ahead of our neighbouring countries.

His reply to my comment on the written language, was a slight but very minute modification of his claim. He said that "it was beyond doubt" that Norway had its own written language c.1150, and he added that this "was many years before Sweden and Denmark". The support for this claim was that under the reign of Sverre Norway parted ways with the Catholic church and its Latin mass. Instead, we "went over to" the English church which unlike the Catholic one held mass in the vernacular. He went on to say that this was a process that had been going on since 1066 when King Olav Kyrre made an agreement with William the Conqueror not to attack England. The impossibility of this agreement can be seen in the fact that Olav Kyrre became king in 1069. However, this impossible agreement resulted over hundred years later - if I understand his timeline correctly - that Norway joined the English church. He furthermore said that this was something Sweden and Denmark did not like to hear about after having ruled over Norway in various periods, and the underlying claim seems to be that Sweden and Denmark are envious of Norway's ecclesiastical liberation from Rome at a time when they themselves were still Catholic.

So, in short: In the 1100s, Norway got its own written language, and this took place two hundred years before Sweden and Denmark. By the end of the century, Norway split with the Catholic church and went to the English instead, as a result of a process that had been going on since 1066, following an agreement between William the Conqueror and a king who would not be king for three years. This particular position was something of which both Sweden and Denmark are very envious. 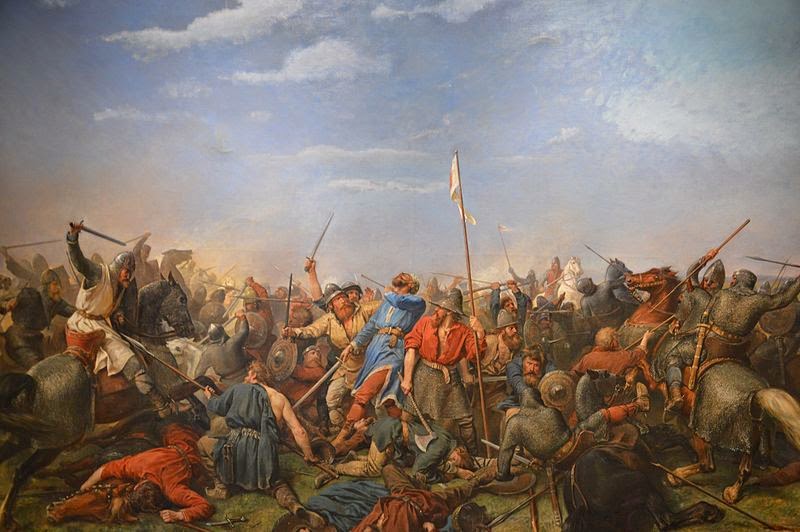 The Battle of Stamford Bridge by Peter Nicolai ArboThree years before Olav Kyrre became king of NorwayFrom Wikimedia
There is very much at play here. The most glaring issue is perhaps the repeated insistence on Norwegian particularism, that our history is so widely different - and even centuries ahead - to the histories of Denmark and Sweden. This is an idea that burgeons from a deep-rooted current of historical interpretation in Norway, and it comes from the fact that for centuries - ever since 1397 - Norway has been ruled by kings from Sweden or Denmark. This lack of historical independence put its mark on Norwegian historiography in the 19th century. This was a century during most of which we were governed by the Swedish king after having been handed over from Denmark in 1814 following the outcome of the Napoleonic wars. Norway's secondary role in the politics of the kingdom led some historians to seek comfort in the past, and the perhaps most spectacular result of this was the claim by Ernst Sars that Sweden and Denmark had been populated from Norway in prehistoric times. Mister G draws from this ideological current in his insistence on Norway's exceptional role in the twelfth century, and although the political milieu that gave force to this current in the 1800s now is gone, Mister G is swayed by the very same little-brother-complex that haunted some of Norway's historians in the 19th century.

There is also another current feeding the ideas of Mister G, namely the Protestant distaste of anything that smacks of Papism. After Norway's reformation in 1536/37, Norwegian Lutherans eventually adopted the historical interpretation moulded and sustained by Protestant anti-papist propaganda. This interpretation of history was very strong and ubiquitous in Protestant countries, and perhaps most accessibly found in the great English epics of Edmund Spenser and John Milton. This current remained strong through centuries, and in the first draft of the Norwegian constitution in 1814, Jesuits were, along with the Jews, denied access to the kingdom. These restrictions were revoked later, and from the 1860s and onwards Catholic missionary work no longer needed to be clandestine, resulting in the first modern Catholic churches to be built at the turn of the 19th century. Nonetheless, despite the gradual acceptance of Catholics, the historical understanding on which Mister G relies has marked Catholicism as something negative. This is why Mister G is so adamant in his insistence on Norway not being Catholic after the twelfth century, and which is why he claims Sweden and Denmark appears to be ashamed of their prolonged Catholic past. 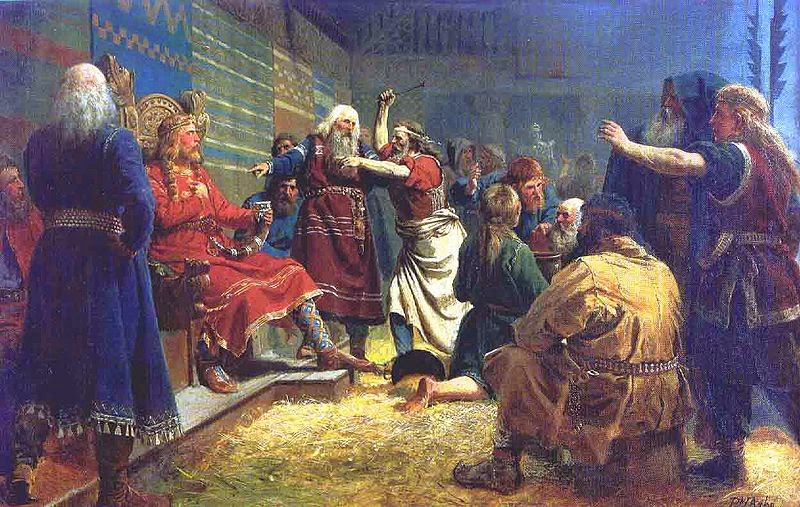 In the grand scheme of things, Mister G's excessively erroneous interpretation of Norwegian history is fairly innocuous. His belief in Norwegian particularism is unlikely to cause harm to anyone, and it has not found a violent incarnation in him. However, the belief itself is thoroughly disturbing and potentially damaging if it is adopted by younger people, or people who exert some kind of influence in political or social matters. I don't for a second believe that it will have nationwide ramifications on a grand scale, the Norwegian public consciousness is too tolerant for that to happen. But it might instil in some people a sense of entitlement, a sense of pride that can lead them on to a path towards increased nationalism and make them dismiss the needs of those from other countries. In a globalised world where millions of people are in dire need of help, and where Western countries have a moral duty to receive refugees, it is necessary to counter ideas of particularism and to fight chauvinism that might prevent people from obtaining a life in safety on the grounds that they don't belong to a country's particular, exceptional historical journey towards the fulfillment of its destiny. The kind of historical misunderstanding embraced by Mister G, is the same kind of historical interpretation that creates a gap between one country and the rest of the world, and in a time of perverse consumerism and increased selfishness throughout the west, we can't morally afford that kind of particularism. No country is alone in the world, and a historical understanding that leads people to think this is the case, is a historical understanding that must be challenged, countered and falsified.