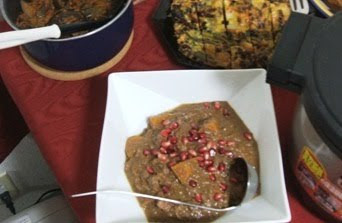 It's been a while since my birthday party, but I've promised a my dear friend Zanmei in Iraq to post the recipe for fesenjaan, that wonderful Persian pomegranate and walnut stew, so that she can try her hand at it with local ingredients.

Fesenjaan (or fesenjoon and various alternative spellings) is perhaps not the prettiest dish in the Persian culinary book, but the lip-smacking tart fruitiness and creamy texture are unrivalled. Not surprising, then, that this is a classic of Iranian cuisine.

It was also this dish that got me to thinking about a possible connection between Persian and Georgian cuisine when I first started reading about the latter. The walnut sauce connection is undeniable. As to which came first, who knows? It has to be said that Georgia does seem to have a larger canon of walnut-based sauces...

For all the stature this particular dish has in Iran, this was actually my first time to make it myself. Walnuts--and pomegranate paste, for that matter--are pricey luxuries here in Japan. But if you can't splurge on your birthday, when can you, eh? You can get both at Tehran Shop in Yokohama, and various shops in Ameyoko in Ueno, Tokyo sell bulk nuts cheaply, if you are making this in Japan.

This recipe comes from Najmieh Batmanglij's New Food of Life: Ancient Persian and Modern Iranian Cooking and Ceremonies, the master work of the doyenne of Persian cooking. Najmieh khanom doesn't take shortcuts or spare the wallet. You've been warned (g).

1 In a large pot, brown onions and chicken in half the oil or butter. Add 1 tsp salt.

2 Heat 2 tbsp oil in a non-stick frying-pan and brown both sides of the butternut pumpkin, then set aside.

3 In a food processor, finely grind the walnuts, add the diluted pomegranate paste or pomegranate juice, cinnamon and saffron water and mix well to create a creamy paste.

4 Add the nut paste to the pot, stirring gently. If the pomegranate paste is too sour, add 2 tbsp sugar. Cover and simmer gently, stirring occasionally with a wooden spoon to prevent the walnuts from sticking, until the oil from the nuts rises to the surface. Add the browned butternut pumpkin and simmer until tender.

5 Taste the sauce and adjust for seasoning and thickness. If the stew is too thick, add warm water to thin it. The stew should taste sweet and sour according to your taste. Add pomegranate paste to sour the the taste or sugar to sweeten it.

1 Heat oil in a frying pan and fry onions gently until they start to change colour.

2 Add chicken and brown on both sides.

4 Add walnuts and fry for 1 min. Remove chicken pieces and set aside. Transfer the remainder of the frying pan contents to a pot, add water and simmer over medium heat until the nuts give off their oil.

5 In a blender or food processor, reduce the nut mixture to a paste.

6 Return nut paste to the pot and add the browned chicken pieces. Simmer at a medium heat.

7 Gently grind saffron and sugar with a small mortar and pestle and mix in the boiling water to dissolve. Add the saffron water and pomegranate paste to the chicken and simmer for 20 minutes.