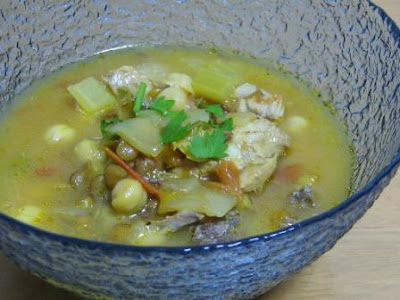 It's been a while since I posted (and made this soup!). Apologies for the delay, but life happens (g).

I had been meaning to make this rich and filling soup for a long time. For Muslims it has particular significance as the soup Muslims in many countries choose to eat before tucking into a huge feast come sun-down during Ramadan. For non-Muslims, it is a great one-pot dish that with the addition of some bread makes a complete meal.

I have recipes for harira in several books, but chose to make this one from Claudia Roden's Arabesque: A Taste of Morocco, Turkey and Lebanon, since it is a Moroccan rendition of the classic. Claudia's recipe feeds 10 (good if you have guests over for the breaking of the fast), but you might want to halve it if your table is less crowded.

One thing that interested me about this recipe was the unusual use of flour as a thickener. It is not added with the meat and vegetables at the beginning before adding water, but made into a white sauce-like batter, and added close to the end of cooking. This gives the soup an interesting satiny mouth-feel that Claudia calls velvety. I reckon that you might want to up the amount of flour if you are using the Japanese kind. I wanted mine a little thicker.

I've since read in Nawal Nasrallah's Delights from the Garden of Eden: A Cookbook and a History of the Iraqi cuisine that there are other soups made with this technique. She calls them "flour soups", which would not have sounded very enticing if I hadn't had this lovely one first. Perhaps when soup weather comes round again we might delve into this some more.

I made this with chicken, but that is just one variation; you could use any other meat you fancy. If possible, do use bones to enrich the stock. I used a couple of chicken carcasses, which my supermarket sells frozen. If you can't get hold of some bones, you might want to add some stock cubes (as Claudia mentions, but does not actually recommend). I also added some chopped preserved lemons (in addition to lemon juice), which perked this up nicely. Then again, I am a bit of a lemon junkie...

Remember to use less water if you are using tinned or frozen cooked pulses.

If using chicken carcasses, blanch them in boiling water for a few minutes then throw out the water. Put the carcasses into a large pan with the meat, cut into 1 cm pieces, the onions and drained chickpeas. Cover with about 3 litres of water and bring to the boil. Remove the scum and simmer, covered, cor 1 hour. Remove the carcasses.

Add the drained lentils, tomatoes and celery (include some leaves), the tomato paste, pepper, ginger, cinnamon and saffron or turmeric. Simmer for a further 15 minutes, adding more water if necessary, and salt when the lentils begin to soften.

In the meantime, put the four into a small pan and gradually add 500 ml cold water, a little at a time, beating vigorously with a wooden spoon to blend well and avoid lumps. Put over a medium heat and stir constantly until the mixture thickens, then simmer for 10 min. Pour this batter into the soup, stirring vigorously, and cook for a few minutes until the soup acquires a light creamy texture.

If you are using vermicelli (crushed in your hand into small pieces), add this to the soup 10 or so minutes from the end, adding the lemon juice, chopped coriander and parsley at the same time.

Serve with lemon wedges and if you like, also dates.