This summer, my family and I undertook a couple of excursions to medieval churches in the fjords. I have previously written about another of these churches, Hopperstad, here, here, and here. In this blogpost, I will give a brief introduction to another church that has elements dating back to the Middle Ages, but which has undergone significant rebuilding in the modern period. This is Leikanger Church, situated in Sogn, and a the centre of a large parish in the medieval period. 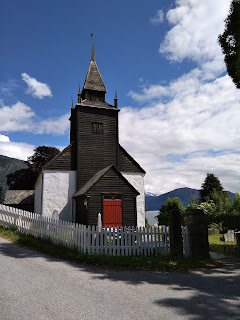 The oldest parts of the church are elements of the stone choir, and a wooden crucifix which is currently housed in Bergen University Museum. It is likely that an older church made out of timber stood on this spot before the building of the stone church, but this has not yet been ascertained. The few medieval remnants only allow for a rough dating of the church to sometime in the thirteenth century, with a tendency to favour the latter half of the 1200s. 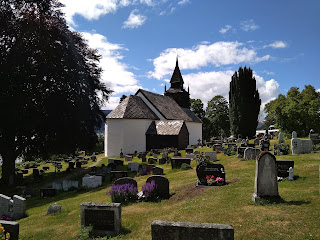 The church appears to have been in continuous use throughout the medieval and early modern period, and there are several items - such as the altarpiece, the pulpit, and fragments of a baptismal font, all of which are seventeenth century. The building itself received its current appearance in the course of two restorations, one in 1872 and one in 1955. It was during the first of these restorations that the church received its octagonal apse. 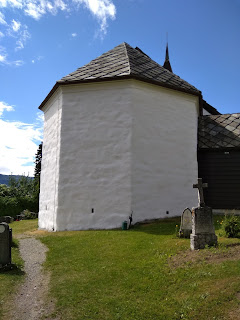 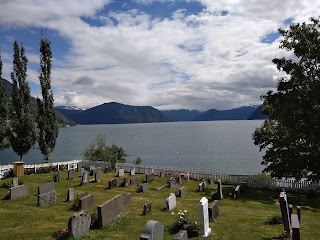 While the church has undergone significant changes since the medieval period, it is nonetheless a very beautiful church with a lot of interesting details. It is located in a wonderful landscape that was once busy with trade from far and near, and it served as the religious centre for many of the far-flung villages surrounding it. For me, the most important aspect of this church was that it was the church that my mother attended during her years as a kindergarten teacher in Leikanger in the 1970s. At a time when a lot of the old features of the villages in the fjords are changing and disappearing, it feels very heartening that although Leikanger church has also changed significantly through the times, it still allows a connection with the past and a sense of permanence. 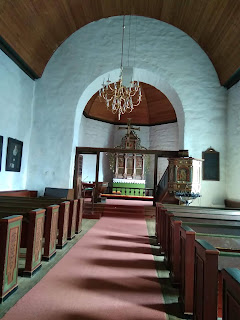 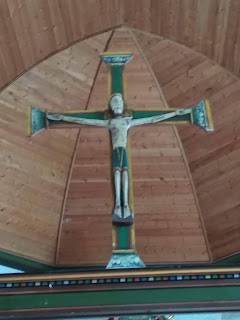 Copy of the medieval crucifix. The original is probably thirteenth century 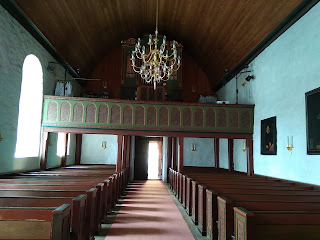