Late Night Check Of The Barn 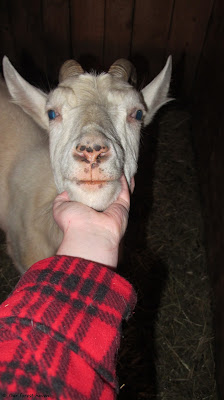 I was worried last night with the barn full of hormonal goats. I currently have two and half billy goats - and that's a lot - for my family.
I was keeping Henrietta (the hermaphrodite) with Bucket and Brie, but she just harasses them to no end, so I had to move her in with Barnaby. They have been together three nights now, but last night they were really having a dispute, so I worried. I tried various groups of goats together, but it didn't really work. Most of my goats won't tolerate having to share a pen because they are so spoiled. I don't know how they think real goats in the real world get along, but here, they want their own space, their own hay, their own treats, their own straw.
Anyway, finally I considered leaving Barnaby outside with Izzie and the dogs. Then I tried leaving Henrietta out. I couldn't do it. They probably would have been fine, but I wouldn't have slept, so Henrietta and Barnaby went back in the same pen, and I trusted they would just work out their differences, since they were not really fighting, just bossing each other around. I still went up to make sure everything was alright later- which it was... except everyone thought I was there to give them a midnight snack. 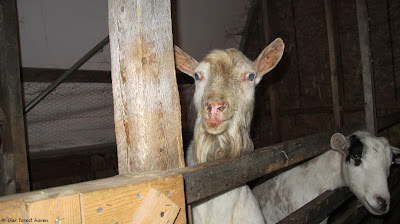 Buckwheat says, "What do you mean you don't want to kiss me?" 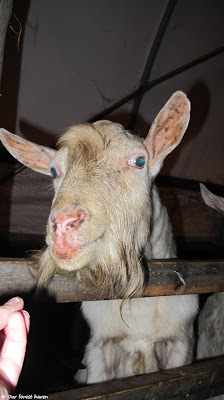 "Oh come on, one kiss! It's just pee all over my face, don't worry about it!" 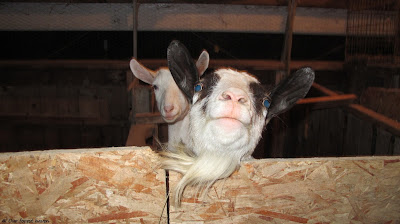 Bucket just wanted to make sure she wasn't missing out on anything. 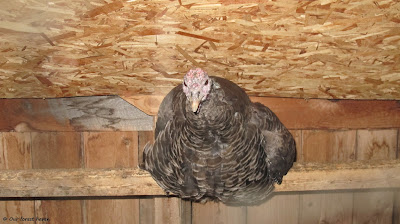 Even all the turkeys got up, except for one hen, who stayed on her roost. 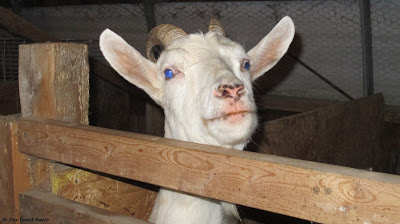 Sammy says "I'm hungry. Please give me a midnight snack, I'll never make it through the night!" 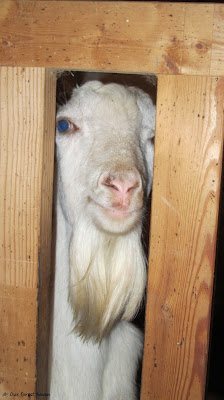 Poor Henrietta says "why are you making me sleep with this Barnaby goat? WHY?" 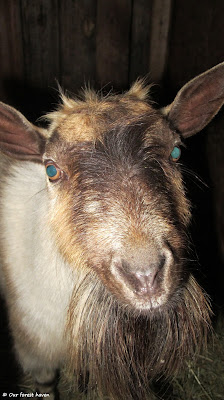 And Barnaby looked either guilty or innocent, I couldn't really tell.
On my way out of the barn, I decided to take a stab *cough* at some ghost hunting, like you see on T.V.

I just aimed my camera into the complete darkness, it flashed, and I hoped to pick up something that I didn't know was there.

Much to my surprise I did indeed pick something up on the camera.... 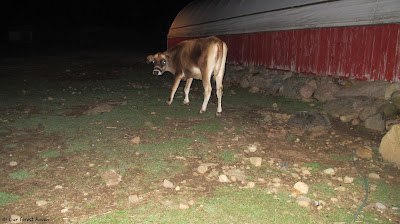 She looked ever so slightly annoyed at me flashing a camera at her too... Could this be a ghost cow? Lurking around the barn?
It did look an awful lot like Izzie though... I gotta admit.