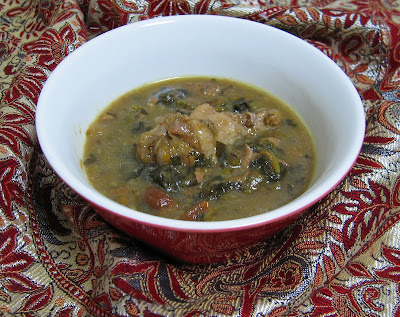 My dear friend G was kind enough to bring me back sour Iranian plums (alu zard) from his recent travels back to Iran. And not just the tart golden plums that I know and love, but another darker variety, too! Naturally I wanted to make this brilliant stew (also a favourite of my dear friend H's) for him first up, but wouldn't you know it, he already had plans for the weekend!

Still, I couldn't quite let go of the idea of having this simple but flavourful treat from Najimieh Batmanglij's fabulous New Food of Life for dinner, and since another Iranian friend, Hw, sounded like he could do with a taste of home, he came to help us make a dent in the huge potful that the recipe makes. (Note to G and H: it's first come first served on the stash I have tucked away in the freezer (g).)

If you are not lucky enough to have an Iranian friend willing to fill his suitcase with dried fruit from back home (and the dried fruit in Iran is some of the best in the world so this is something you might want to rectify(g)), the good news is you can make this stew with prunes as well.

If you are new to Persian food, you might want to use less fruit the first time you make this, to give your palate time to adjust to the the fruit and meat combination that is so characteristic of the cuisine. I used less as well, and but won't next time, as the plums had mostly disintegrated into the sauce by the time the stew was finished cooking. I seem to remember them staying whole the last time I made this, so I will experiment with putting this variety in later in the cooking time next time.

Also, I didn't faff about steaming the spinach before adding it to the stew. I suppose this would release the juice and reduce the volume in order to get it all in the pot, but since I like my spinach to have a little body (g) and as I was using less of it to begin with (3 Japanese bunches or around 600 g and not 2.7 kg as directed), I managed to cram it all in the pot in one go.

For a change, I made the khoresh with "wingsticks" (wing drum sticks), for the extra flavour from the bones. You should up the weight of meat in this case (maybe 200 g extra).

I also didn't have any Seville orange juice, so used orange juice sharpened with lime juice as Najmieh khanom recommends.

This stew can be on the table far quicker than the recipe suggests. If you make it with chicken and use a pressure cooker you could probably get it on the table in around 40 minutes.

3 In a skillet, brown the remaining onion, then add the spinach and saute for another 2 minutes.

4 Add the spinach and onion mixture, golden plums, sugar and orange and lime juices to the pot. Cover and simmer 1 1/2 hours longer over low heat.

5 Check that the meat is cooked. Taste the stew and adjust seasoning.