Jonsok - The Wake Of Saint John The Baptist

Yesterday was the feast of John the Baptist, which is one of few saints of the liturgical calendar whose main feast is the day of birth rather than the day of death. In Norway, this feast is traditionally called jonsok, which is a compression of jonsvaka, which means the wake of Saint John [the Baptist]. We celebrate this feast even today, and it is marked by a large bonfire on the evening before the feast itself, i.e. the evening of June 23. This bonfire is known in my part of the country as briseld - with some neighbouring communities using the variant priseld - which comes from the Old Norse bris (meaning shining or glimmering) and eld (meaning fire, still used in modern Norwegian). The tradition of lighting a bonfire is very old and can be found in variants throughout Western Europe. According to a medieval belief recorded by Jacobus de Voragine in Legenda Aurea (c.1260), these bonfires originated as a means to keep away dragons in order to prevent them from ejaculating their semen into wells and springs, thereby poisoning them. Whether this has ever been the rationale behind the practice is now impossible to say, as the roots of this tradition is lost in the mists of time. Regardless of its origin, however, I'm always happy to see the bonfire burning amidst mountains on one of the brighest nights of the calendar year. I therefore present to you some images from the day as it unfolded in my native village, Hyen. 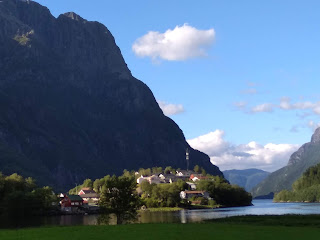 Underway to the celebration, c. 7 in the evening 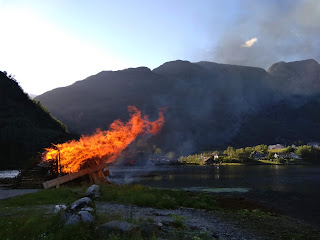 Shortly after the bonfire has been lit, c. 8 in the evening 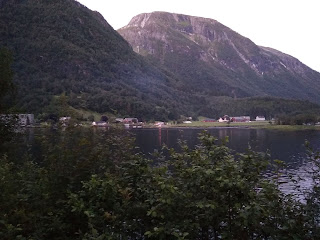 The remains of the fire can faintly be seen in the distance.
The smoke is visible against the forested mountainside
Around midnight. 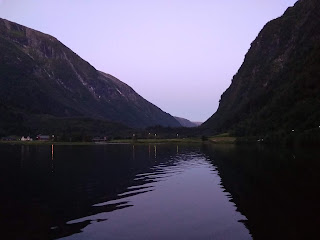 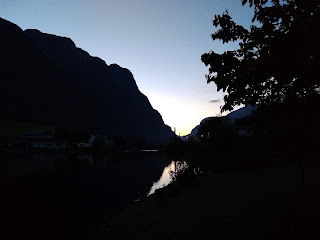 Around one in the morning.