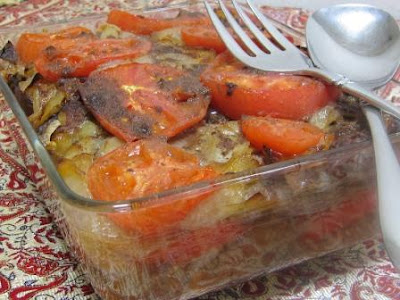 When I was but a stamen in the bud of the family crocus, Saffron-Papa was in the habit of making lazy Sunday dinners that would get started around 3 pm and eaten 3 or 4 hours later.

Often it would be a big pot of soup, or a roast or what have you, that he would get started early and leave to do its thing, popping back in from time to time only to check its progress as the afternoon wore on. He could enjoy the motor racing or whatever the sport of the day was, and produce something very tasty for dinner--without breaking into a sweat.

These days we call it Slow Food, and if anyone had suggested then that one day I might like nothing better than puttering about the kitchen producing a meal that might take hours to reach perfection, I would have wondered if they were delirious.

However, it seems that genes do sometimes have their way, and now it is my turn to pass on the lazy Sunday supper tradition.

I've made the recipe below several times now, but the first time I made it was the weekend after "shock and awe". It was a little act of solidarity with the people of Iraq as their country was invaded by the US and its hangers on, such as the countries of my birth and later residence. Not one of our finest moments. At that point I did not have a lot of Iraqi music (I'm still open to recommendations, if anyone has any. Hint, hint (g)), so I cranked up a classic Antipodean protest song by the cult band Midnight Oil, which starts with the line: "US forces give the nod/ It's a setback for your country". As protests go, mine was decidedly ineffectual, but I did learn a new dish and gain an appreciation for the culinary arts of a country unlucky enough to be in the cross-hairs of the US.

This is another recipe from Claudia Roden's masterpiece The Book of Jewish Food, where she tells us that it "became the traditional festive and Sabbath dish of the Bombay [Jewish] community, which was formed in a great part by Jews from Iraq." Well that's not so surprising I suppose, since lamb and tamarind are staples in India, too.

Anyway, it is the perfect dish for one of those lazy Sunday afternoons we were talking about earlier. The only thing that requires any close watching is the caramelising of the onions and frying of the eggplant [aubergine], which you can do at the same time, anyway.

I cook the meat under low pressure for around 40 minutes, which is plenty of time to sort the onions and eggplant.

I would also suggest adding a little more tamarind paste (say half a tablespoon) for extra oomph.

Simmer the meat in water to cover with a little salt for 1 1/2-2 hours, until tender [S: about 40 minutes under low pressure].

Sprinkle the aubergine slices with salt and leave for 1 hour to draw out their juices.

Fry the onions in 3 tbsp of oil over low heat till very soft and really brown, which gives them a caramelized taste [S: adding a pinch of salt to the onions is supposed to speed the caramelising process].

Rinse and dry the aubergine in a tea towel, then fry briefly in very hot oil [S: I slice the eggplant fairly thick, so it is better to fry them over medium heat until tender as they don't cook much more in the oven], turning over once, until lightly browned. Alternatively, you can brush the slices with oil and cook them under the grill [S: perhaps in other countries with grills larger than 2 slices of toast... (g)].

In a [deep] baking dish, assemble layers of aubergine slices, drained meat (keep the stock), onions and tomatoes, sprinkling each with a little salt and pepper.

Heat about 250 ml of the meat stock in a small pan and stir in the tamarind and sugar. When the paste has dissolved, pour evenly over the layers. Bake at 180 C for 30-40 minutes. Serve hot with rice.