My next post about the Geology of the National Parks Through Pictures was from a trip to meet some friends at Crater Lake. Since that was a rather long drive for us with the trailer we stopped over at Lassen Volcanic NP in California along the way.

You can find more Geology of the National Parks Through Pictures as well as my Geological State Symbols Across America series at my website Dinojim.com.

Crater Lake National Park
We made it to Crater Lake, and after driving up to the park 3 separate times we were finally able to find a place to fill up the trailer with water before camping within the park. Crater Lake is a geological destination that has been on my bucket list for some time. Unfortunately, the boats were shut down still because it had been so cold up there and even on 4th of July weekend there was still significant snow around. 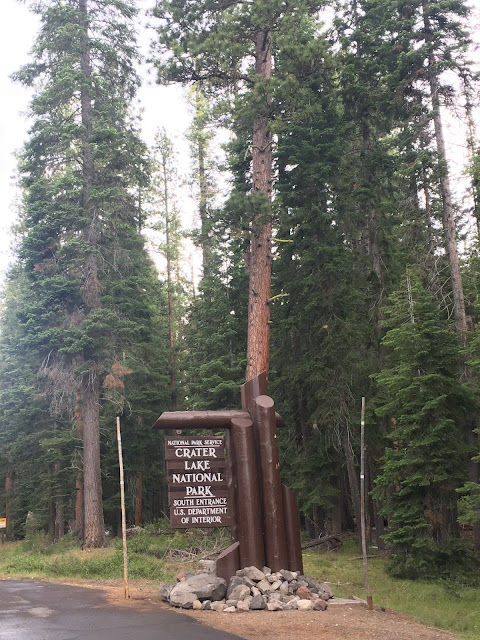 The entrance sign, one of the countless times we drove by it.

We did end up lucking out though. The rim road, that goes all the way around the lake, was closed half way when we arrived. However, a few days later it opened up for the season and we were able to take the tour bus all the way around. Several of my photos were panoramas of the lake from different directions so I ended up filtering them here to only the few best ones. This is the overlook of Wizard Island. 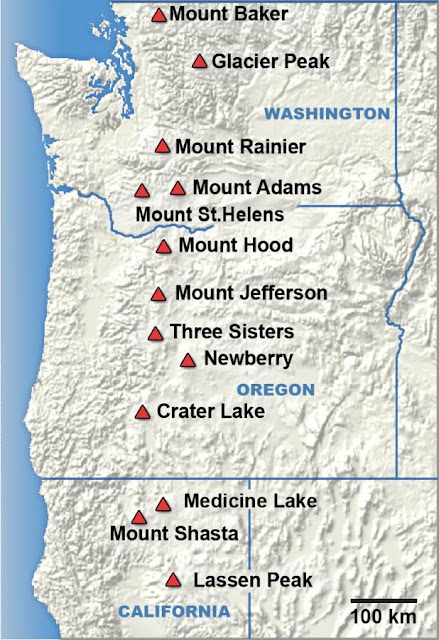 Like Lassen Peak to the south, Crater Lake is a volcano located along the Cascade Range in the Pacific Northwest of the United States, which runs north into British Columbia in Canada. Crater Lake was originally a full blown volcano known as Mount Mazama, which was ~12,000 feet high before it erupted ~7,700 years ago. Image courtesy of the USGS.

These volcanoes formed from the process known as subduction where one of the Earth's crustal plates descends slowly below another plate. As the denser plate descends, it begins to melt. The melted rock then rises up through the crust creating a line of volcanoes known as a volcanic arc. Crater Lake is one of the volcanoes located along the Cascadian volcanic arc. Image courtesy of the USGS.

Here is a view of Crater Lake further around the rim from Wizard Island, which can be seen on the left side of the photo. Mount Mazama, like Mount Tehama to the south that eventually eroded into Lassen Peak, was a composite volcano. There are lots of different types of volcanoes. A composite volcano is a volcano that is composed of  alternating layers of ash, lava flows, rock fragments, and cinders that slowly piled up over time from smaller eruptions. The primary type of magma in this volcano was the thicker magma, termed felsic, that has a higher silica and gaseous content, than volcanoes in places like Hawaii. Felsic magma and lava has a tendency to flow slowly and also to clog up volcanic vents. This periodic clogging allows the volcano to build up pressure, both from the thick lava and the high gas content within the volcano. It is like a soda bottle being shaken before the cap is released. Around 7,700 years ago the cap was released, producing an enormous eruption that released ash, gas, rocks, and lava into the air and surrounding regions. Eventually the magma chamber mostly emptied, leaving a gaping void below the mountain peak, which collapsed in on itself. This formed a bowl shaped depression known as a caldera. Later, smaller eruptions sealed the caldera floor, allowing for water to accumulate over time.

Crater Lake is one of the few volcanic calderas that are fully isolated from the surrounding water environment. Water only leaves the lake through evaporation and a small amount of seepage while it only enters the lake through snow and rainfall, keeping the lake at a nice balance. The lack of streams into the lake has also nearly eliminated the sediment within the lake, producing a crystal clear lake that reflects the deep blue of the sky. 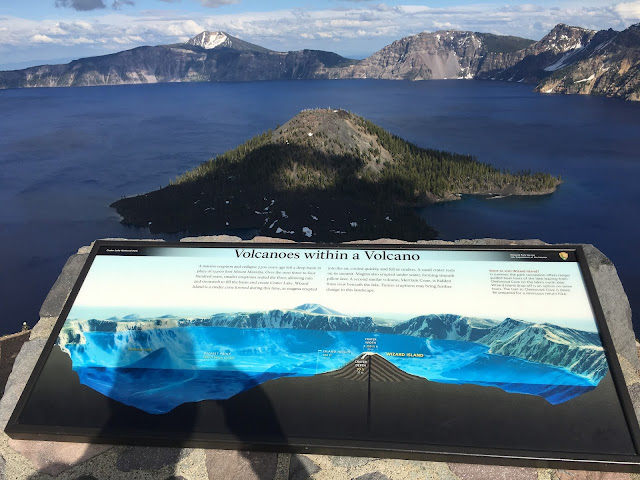 Easily the largest island in the lake is Wizard Island, seen here. Wizard Island was formed during the subsequent eruptions shortly after the formation of the caldera. Wizard Island is a cinder cone, similar to the Cinder Cone at Lassen Volcanic National Park. A cinder cone is another type of volcano that is produced when lava splutters out of a volcanic vent. As the lava is spit into the air is cools and forms a type of rock that is usually smaller in size and has a lot of air holes called scoria. During the course of the eruption these small chunks of rock pile up around the volcanic vent and eventually pile up to form a cone. The cinder cone Wizard Island is over 700 feet high from the surface of the water. 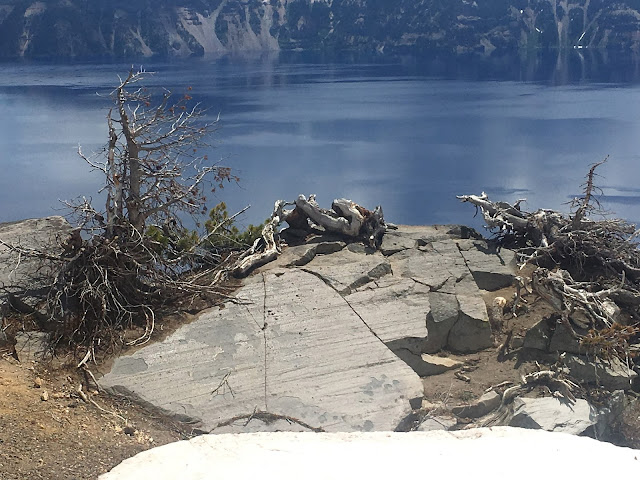 Prior to the eruption 7,700 years ago, Mount Mazama was frequently covered in glaciers that would come and go over time. Evidence and remnants of those glaciers can still be seen today. The rock here is covered in what are known as glacial striations. These are scratches across the rock formed when a glacier moves over the surface of the rock. Embedded within the base of the glacier are chunks of rocks that have been picked up by the ice and then dragged across the ground, scratching the bedrock as it goes. The scratches, glacial striations, are a great tool for teaching us what direction the glaciers moved in. 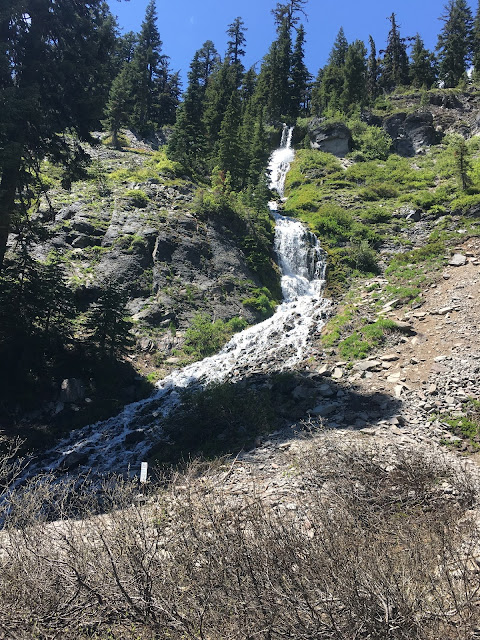 Other glacial features of the landscape can be seen here at Vidae Falls, where the cliff over which the falls tumble was carved out by a prehistoric glacier. 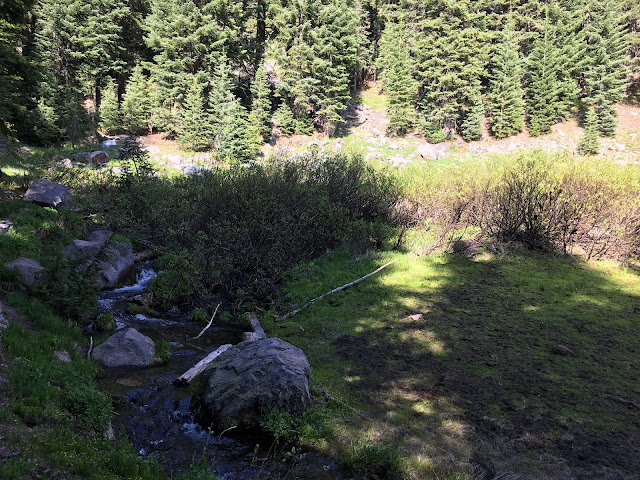 Although the source of the stream water is limited on the outside (and inside) of the crater, there are still numerous streams that have water sources from the melting snow. This is a nice wild flower trail near the park headquarters. 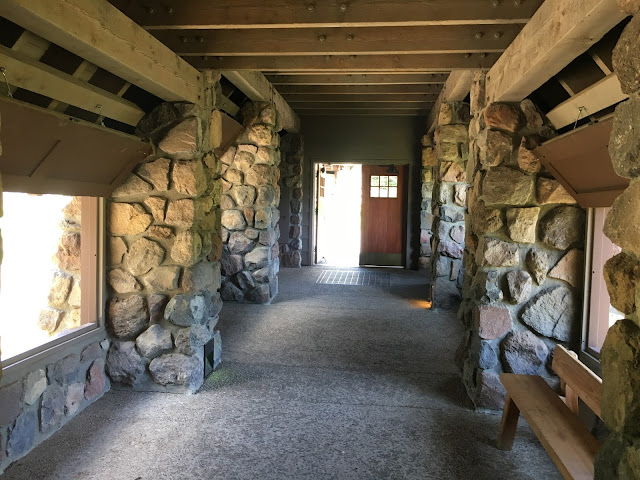 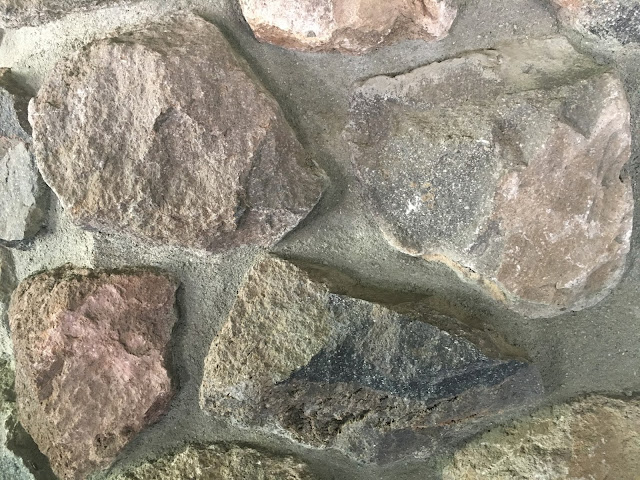 The stones seen here are all igneous in origin, likely taken from nearby. Rhyolite seems to be the predominant building stone, although I saw several pieces of basalt. It appears much of the building stone within Crater Lake National Park came from Ball Diamond quarry, however I can't confirm whether these visitor center stones came from there, or even what rocks were quarried there. 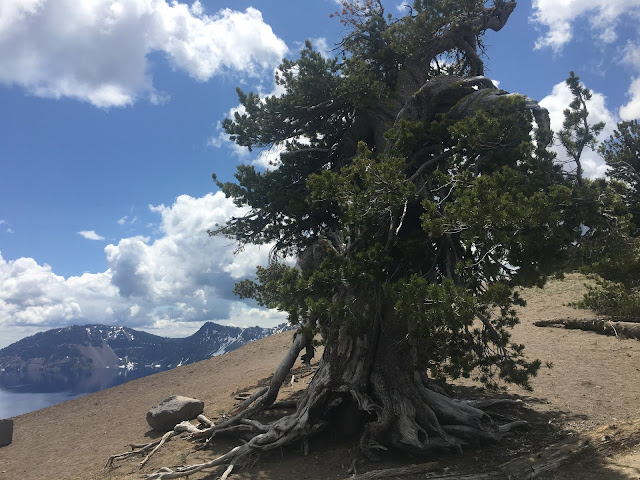 The Grandmother Tree, which is estimated to be about 500 years old and is the oldest tree in the park.

View of the lake from across the previous location. Wizard Island can be seen on the right side between the trees. 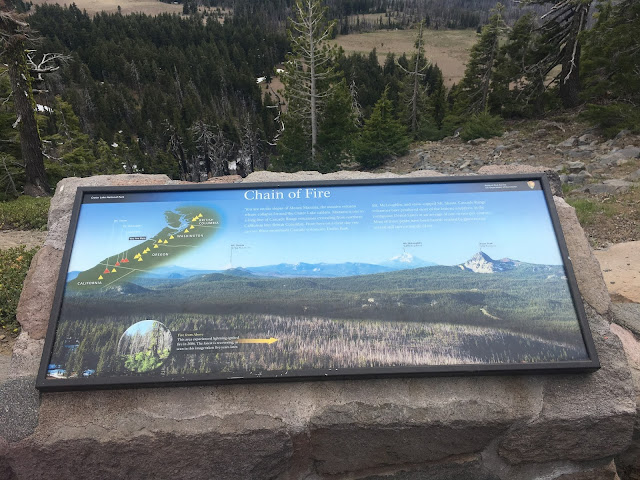 On the rim edge, looking outwards, several of the other volcanoes along the Cascade Range can be seen in the distance. Here is a highlighted map and image of the distant mountains with an accompanying photograph I took below. 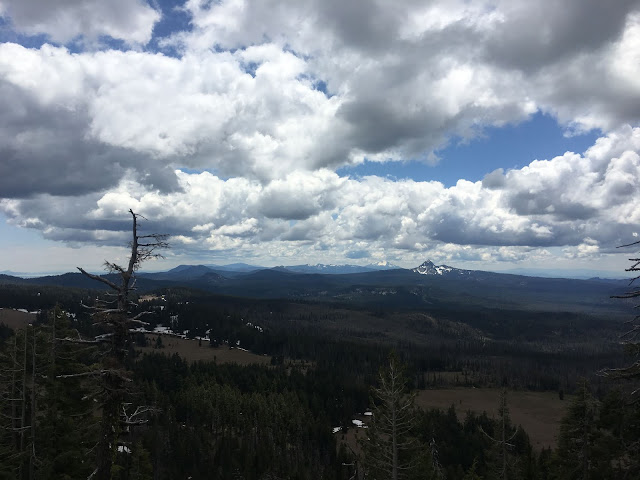 Here is the view that accompanies the image above. The noticeable white peak on the right half of the image above is Union Peak. The larger peak in the distance, just to the left of Union Peak is Mt. McLoughlin, and in the far far distance on the left half, beyond visibility on this photo is Mt. Shasta. 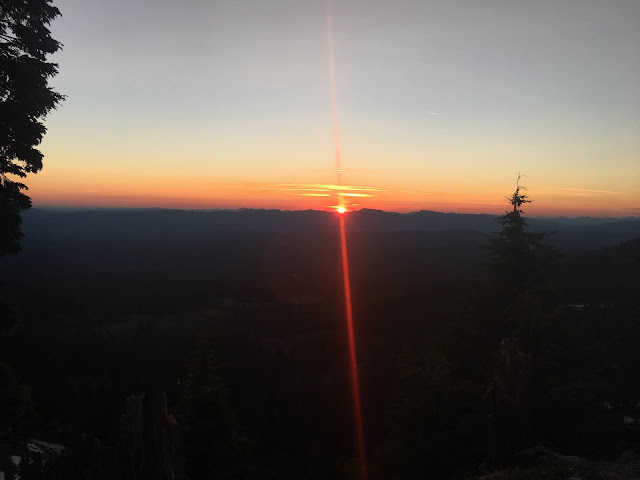 The sun setting on Mt. Shasta in the distance, viewed from the Crater Rim western edge.