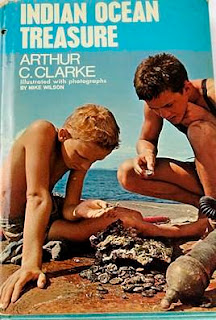 When I was a kid in the 1960s, juvenile science fiction was great, all about boys falling in love as they fled from the tripods or zapped through the solar system.  But then I became a teenager and started reading science fiction for grown ups, which was -- and still is -- heterosexist, mostly about men and women falling in love:


A. E. Van Vogt, Two Hundred Million A.D. (1943): L Onee was waiting. Together they closed and sealed the door. Together, they went up out of the darkness into the light.

Raymond Jones, Man of Two Worlds (1951): "I want to marry you] more than anything else in the world,” Elta said. She drew close and laid her head against his shoulder.

Michael Moorcock, The Wrecks of Time (1966): She winked at him. He grinned and winked back. They walked into the house.

John Brunner, Interstellar Empire (1976): She came down the steps to Ordovic, and put her arm around his waist, smiling. 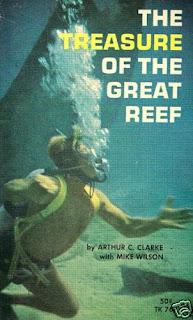 But then at a garage sale in the mid-1970s, I stumbled upon two books about muscular boys bonding as they explored the Indian Ocean.  By Arthur C. Clarke, whom I knew as the inspiration for the movie 2001: A Space Odyssey.  Surely his science fiction would not be obsessed with feminine smiles.

So I began reading.  And kept reading. 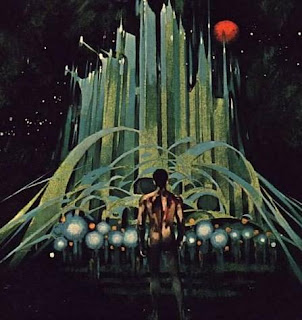 Against the Fall of Night (1948): Alvin is a teenager living in the distant future city of Diaspar.  He becomes the first person to leave the city in countless milennia, explores the savage world outside, and buddy-bonds with a boy named Theoron.  At the end he decides to take a spaceship and explore the stars, and Theoron goes with him.

When Clarke revised the novel into The City and the Stars (1956), he gave Alvin a girlfriend in Diaspar, like the Hardy Boys have girlfriends in regular time, but she is completely forgotten once he begins the adventure.

Childhood's End (1953): Galactic overlords land on Earth and transform all of the children into a new, advanced species, another entry into the "threatening gay kid" genre. 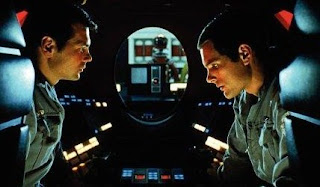 2001: A Space Odyssey (1968): a homoromantic idyll with two astronauts, Dave and Francis (played by Keir Dullea and Gary Lockwood in the movie) jetting out toward Jupiter in the Discovery One, until the computer Hal gets jealous. 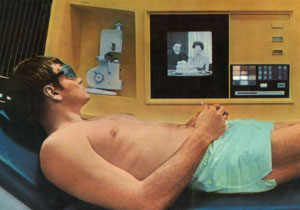 Arthur C. Clarke was well known in the science fiction community as gay, although he never came out publicly (when asked by a reporter, he always gave a coy response like "Why? What have you heard?").

In 1956 he moved to Sri Lanka, which being gay was legal  (Britain didn't decriminalize homosexuality until 1957).  He stayed there until his death in 2008.