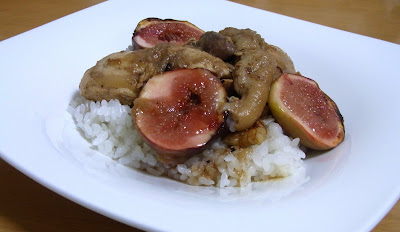 Always luscious, well herbed and spiced, and often, though not here, featuring my beloved lemon, Moroccan food is an all-time favourite at the Saffron household. But even given all that, this dish is nothing short of alchemy.

It has just a handful of ingredients and only a smidgen of spice, and cooks up in just over 40 minutes. Oh, but the result!

With warm spices cinnamon and ginger, honey and caramelized figs, you might expect this braise to on the sweet side. Instead, it is deeply savoury and autumnal, especially with the added crunch of walnuts. Using little water, this would also be perfect to make in an actual tagine, if you are lucky enough to own one. (I am holding off on getting one, as the Saffron kitchen is already groaning under the weight of too much foodie paraphernalia.)

We had this with totally inauthentic rice for the sake of speed, but I'd love to do it again with a nice fruited and nutted couscous.

The original recipe is from Claudia Roden's Arabesque: A Taste of Morocco, Turkey and Lebanon, which sometimes gets a bit overlooked in my collection, standing alongside Claudia's major works A New Book of Middle Eastern Food and The Book of Jewish Food.

1 Heat butter and oil in a large pan. Put in the onions, cover and let them soften slowly over a medium heat, stirring from time to time. When they begin to colour, stir in the ginger, saffron and cinnamon. Put in the chicken pieces, season with salt and pepper, and turn to brown them lightly all over.

3 Let the onions reduce to a rich brown sauce. Stir in the honey and taste to make sure you have enough salt to balance the sweetness and enough pepper to mitigate it. Add walnuts.

4 Meanwhile, sprinkle fig halves with a little lemon juice and a little castor sugar, and put them under the grill for a few minutes to barely caramelize. Serve them as a garnish on top of the chicken pieces.