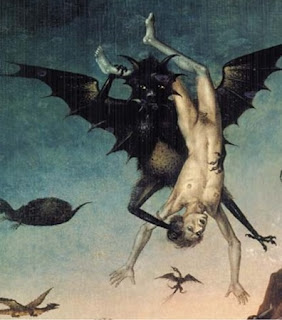 A scary monster is carrying away a naked guy.  I guess we're supposed to feel terror, but when I was a kid and saw this painting in my friend Greg's house, the only thing I could think of was "I can see his wiener!"

It was just a small painting in his father's study, so I didn't see it often, but it was memorable, probably because my reaction was so different from the one expected of me.

I just tracked it down: A segment of  La chute des damnes (The Fall of the Damned), paired with L'Ascension des élus (The Ascent of the Elect), painted between 1468 and 1470 by Dieric the Elder, now in the Palais des Beaux-Arts in Lille, France.

But don't get excited. There are a few butts, but no more wieners. 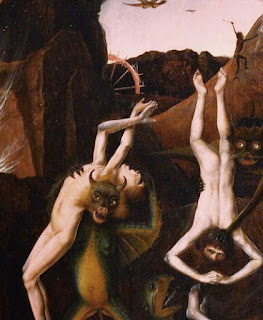 We don't know when Dieric Bouts was born (probably between 1410 and 1420), or where he studied (his work suggests the influence of Flemish painter Rogier van den Weyden).

We know only that he became the "official painter of Leuven" (now in Belgium) in 1458 or 1459, that he was commissioned to do a lot of portraits and religious art, that he married twice and had four children, and that he died on May 6th, 1475.

And that he was interested in muscular male bodies. 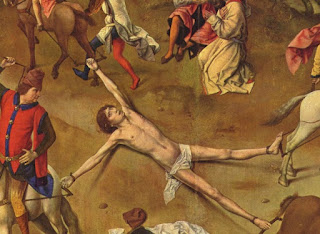 Check out The Martyrdom of St. Hippolyte, the center panel of a tryptich that Dierich painted for the altar of the Sint Salvator Kathedral in Brugge about 1470 (now in the Groningen Museum).

Looks like the same guy as the one being carried away by a demon. 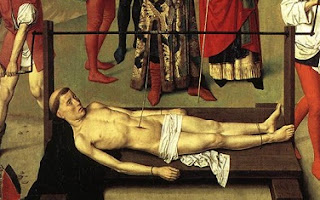 His beefcake model got a monk's haircut in The Martyrdom of St. Erasmus, the central panel of a tryptich in the Sint-Pieterskerk in Leuven.

Dieric definitely had a type.

His two sons, Dieric the Younger and Aelbrecht, both became painters.