David Barry Gray: Not As Homophobic As Chevy Chase, Probably 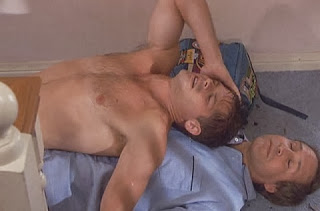 Chevy Chase may be one of the more homophobic actors in Hollywood, as his cast mates from Saturday Night Live and the National Lampoon's Vacation movies can attest, but the naked man on top of him, David Barry Gray, is not.  Not very, anyway.

Not as homophobic as Chevy Chase. 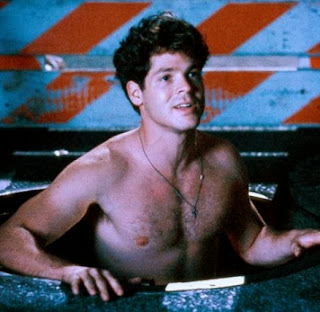 The New York City native, heir to the Pepsi Cola fortune,  has appeared on many tv series, beginning as a teenager with William Tell (1987-88); he played William's son, Matthew.  Other series include 21 Jump Street, The Client, JAG, Medium, Ghost Whisperer, and Rizzoli & Isles.

Not a lot of gay subtext vehicles, although you could include his role in S.F.W. (1994), as the brother of hostage-survivor Stephen Dorf, and the "rescuing people from Southeast Asia" movie Soldier Boys (1995), as Lamb, who steps on a land mine (sacrificial lamb -- get it?). 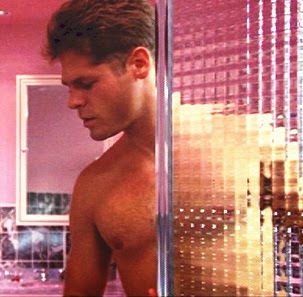 No gay characters, although he did star in the mega-homophobic Lawn Dogs (1997):

A lonely ten-year old girl and her only friend, the reclusive Trent (Sam Rockwell), both have problems with unwelcome sexual advances from a couple of sleazoid roommates: the girl from Brett (David), and Trent from Sean (Eric Mabius).  Not to worry, the evil gay guy is killed, but the pedophile isn't. 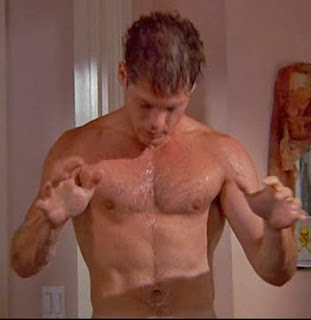 His sister-in-law, Ariel Winter, stars in the gay-positive Modern Family as the brainy teenager Alex Dunphy.

Doesn't that suggest that David is gay-positive?

Well, at least he has a nicely toned physique.