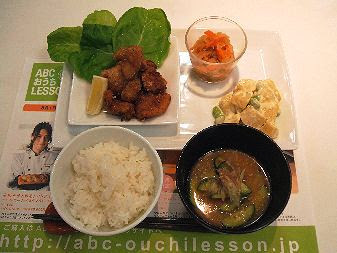 As you know, I often moan about the length of time it takes to cook Japanese food (hence its general absence from our weekday menu). However, in my very first official cooking class with ABC, we made, ate and cleared up an entire Japanese meal in 2 hours!! 'Course, there was 4 of us, so it doesn't really compare to making things at home alone, but still, I thought it was a pretty good effort.

Traditionally, a Japanese meal is not complete without, at minimum, one soup, three side dishes and rice. And many times more than three dishes will be prepared. It's enough to have even card-carrying foodies ripping their hair out of an evening.

From this lesson I learned that when inserted into hot oil, a bamboo cooking chopstick (much longer than regular chopsticks and able to be put safely into boiling fat) will have small bubbles form around it in 3 seconds at 160 degrees C, the same small bubbles will form almost straight away at 170 degrees, and a great many bubbles will form vigourously immediately you put the chopstick in at 180 degrees.

You can also tell when your deep-fried goodies are ready with the tried and true Japanese method of holding the near-ready food in your cooking chopsticks and if you can feel a small vibration in your chopsticks, it's done. The teacher was keen to know how we Western cooks know when something is ready, but as I hardly ever deep-fry anything, she was asking the wrong person (g) . I reckon it's colour we usually look for, though.

Anyway, the day's menu was all very tasty. Karaage is an izakaya (Japanese tavern) staple, and we regularly order it. Now I can make it myself and have as much ginger in it as I like! The potato and edamame might make a good addition to a meze spread. The cold miso was a revelation to me, and the Young Man is quite intrigued by it, too. I'll be making it for him shortly, while we still need relief from the awful, muggy heat. Watch out for my take on the recipe then.