Comparison Of VERSE And LangX. Peek At First HIOXian Character. 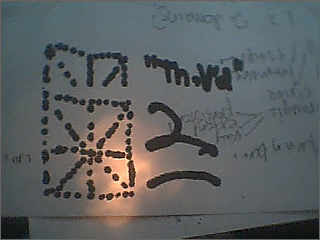 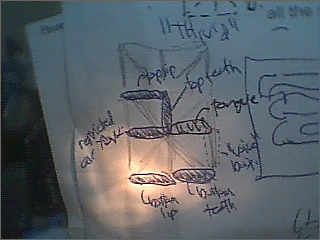 D: I really must use a proper font creation program.
Sorry about the sketchy diagrams. Nonetheless, I think it shows the gist of HIOXian.
This particular character is the "TH" sound in 'loathe' and not not 'loath'.

You can now see the stylized anatomical figure in cross section that HIOXian represents.
In this case, the consonant is a square in the bottom 2/3 of the character space.
An optional diacritic can be placed above it.
Vowels would occupy the TOP 2/3 square of the space. Or v.v..
I think Roman alphabet conventions would make placing the vowels low more intuitive.

I now think I will simply not indicate anatomical parts that are disengaged, thus freeing up those bar segments for additional miscellaneous meaning. Cursive will also be faster.
I indicated an example of cursive writing. I confess I was inspired by Octomatic's approach.

Try to say "think". You likely did not say th-i-n-k. You likely said th-i-NG-k, even though that is NOT what the letters are. Biomechanics. It is easier. Your tongue is lazy. This is no surprise. The nerves send signals along routes of various lengths. Musculature varies, as does mass at rest and inertia of various body parts. It is a wonder we can be understood at all!
At any rate, now imagine (yes wave hands here until I finish it) the symbols for N and K side-by-side. Recall again how Octomatics allows arithmetic visually and without understanding of conventional mathematics. Now imagine a simple comparison of two bars, one in each HIOXian character. Using a simple comparison chart, somebody unable to use the IPA system would be able to point out that N is likely to deform into NG.
And so on.

I need to pay money for a decent font creation program. That means I need a credit card...

Number of Consonants and Vowels

D: again, I'd be concerned about AI/transhumanism on that time scale.

For the purpose of my sci-fi story, the musical pitch system of VERSE (VERy Simplified English) will be as follows.

See my first blog entry for VERSE.
Basically, the hypothetical future scenario for an English Pidgin is as follows:
1) We start with Standard English
2) a mixing-pot culture of non-academics has a need for a useful fast new interlang
3) Verb affixes are removed and all such functions will be handled by particles.
4) Optionally, the particles are replaced with pitch on the simple basic verb.
5) More and more verb aspects are absorbed by more and more pitches.
This process is optional. Just like we talk down to children with simpler speech, so too could a future society replace pitch with the older verb modifier particles.
Optionally, BOTH could be used simultaneously and redundantly. This would be used for when a message MUST be very clear. It would likely also be used in a patronizing fashion.
In an emergency situation, when time is critical, only pitch would be used.

The example I used on the VERSE page was the following sentence.
"Dog bite boy." That is not proper English. So this must be early pidgin.
We all know how to modify the verb bite.
So too a noun, subject or direct/indirect object.
Bite, bit, biting, will be biting, et al.
A dog, some dogs, the dog, the(s) dogs, those/these, this/that, yadda yadda.

Language X/ Language 53 proposes reintroducing synthetic language elements gradually. However, my VERSE sci-fi scenario is for a subculture of submariner sea-faring nomads.
They have different demands for a language.
I saw a show on a crisis in a jumbo jet. I think the engine had failed or some such. Human factors analysis indicated that for brief periods English transmitted meaning at about 1 unit of meaning per second. I pondered how all those articles and auxiliary verbs and whatnot slowed them down. Of course, those grammatical elements were necessary for clear meaning, so were still used.

Well, affixes/particles (for synthetic and analytic respectively) are both essentially, to use an analogy, two-dimensional. They need to fit in their own part of time for communication.
They cannot be superimposed on top of root/stem words in a "three dimensional" sort of way.
Pitch essentially introduces a Cartesian Z co-ordinate. It takes the 'square' of words and makes them cubic, with depth.

VERSE is highly compatible with the LangX early stages. In fact, it can be seen as an alternative future route for LangX, once the basic international creole-esque vocabulary has been established and synthetic words have all been broken up into separate word particles.

Let us revisit that one sentence for a moment.
Dog bite boy.
There are a number of Eastern music octaves. Typically they have about 20 pitches, at quarter pitch-note intervals.
Three words.
Noun (subject) Verb Noun (direct object).
20x20x20.
20x20 is 400. 400x20 is 8000 permutations. In three words. In 3 syllables.
A language with optional agreement, with a simple mechanism to talk to early generations of speakers.
I need to hash out a similar system for prepositions. I am sure I can keep them down to one syllable also.

Aside: I was on a bus the other day. Looking at the 'next stop' sign, I was counting the pixels and studying the characters. They looked like Ygyde. OK, my objection about 45 degree angles was not valid. Those map just fine onto a low resolution monitor.