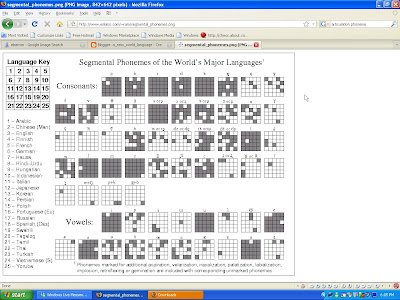 D: very nice summary chart of common world phonemes.
I saved the screen with Printscreen. It saved to bmp format.
I then opened it up and resaved as a jpeg in Paint.
A bit of work...

Looking for common phonemes in this chart, I am reminded of an old song lyric from "Garden Party". It goes "you can't please everyone, so you've got to please yourself".
http://bahai-library.com/books/lango/lang36.html#a

D: this is tricky. There is some art as well as science involved. Some sounds are subdivided into subsounds, but may be palatable to many as a more general sound, particularly R-derived ones.

"UPSID was a phonological inventory of 317 languages published in 1984 by researchers at the University of California. Examination of the selected tongues, each one representative of a different recognised language family grouping, showed the following 20 to be the commonest consonant phonemes:"

D: this UPSID study is the typical starting point for a second-language aux-lang.
If one excludes all deal breakers, i.e. any phoneme at least one major language lacks, there are not many left at all.
Take Japanese, for example. They do not distinguish between L and R. And so on.
Sounds that English-speakers assume are common may not be. Any TH derived sound, for example.
A quick comparison to Esperanto shows how bad it is by this measure.

Aside: I still get posts from the Esp-o facebook group. They want it taught in schools. WHY?!?

http://www.xibalba.demon.co.uk/jbr/ranto/#bJapanese: / m b p w n d t r z s j g k h / Hawaiian: / m p w n l k h ? / Rotokas: / p B t * k g /
D: the unfortunate thing about the 'arts' is that nobody ever decisively wins a point.
The loser can claim the points are spurious or adequately answered.
The Esperantists are still insisting they've adequately responded to any and all criticisms.

Universal Esperanto Congresses take place each year in a different nation.
2009 Białystok PolandThen Cuba in 2010- closer maybe.
MONTREAL, QUEBEC--(Marketwire - July 7, 2008) - Between July 11 and July 18, 2008, the Quebec University in Montreal (UQAM) will host the 7th Esperanto Congress of the Americas (TAKE7

D: I can only imagine the sorts this attracts! I somehow imagine lots of UNIX programmers, aged and with beards, LOL!

Back to LangX - it initially proposes 20 consonants and 5 vowels.
I have seen schemes that stick to AUI for vowels to make them almost truly universal.
I can only assume it would be remarkably verbose or far too general.

D: my news year's resolution is to complete my alphabet.
This will involve
1) taking my HIOX basis
2) xeroxing a blank of the character dozens of times
3) studying one good university website with little animated movies of articulation
4) showing these on the standard pictogram, slightly stylized
5) converting them to somewhat more abstract or at least obscure pictogram
D: they should be obvious once the code or key to read it is indicated.
I was reading about Etruscan and realized a problem with a phonetic or phonemic alphabet. It requires centralized received pronunciation or else every area with their own dialect will spell it differently. Until the advent of large-scale government structures and mass media, phonetic alphabets were a can of worms with more problems than they were worth.