Color Naming And Cultures. The Order. 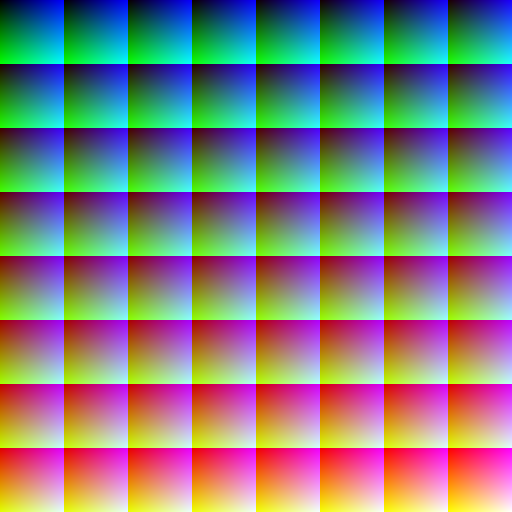 
I've seen it claimed that Chinese had no word for pink before modern European contact, while the Russians use separate words for dark and light blue.Yet amongst all cultures, the historic and pre-historic record seems to show that people named and identified the colors in a specific order: black and white, then red, green and/or yellow, blue, brown, then finally a smatter of purple, pink, orange, or gray. A paper in the latest issue of PNAS, titled "On the origin of the hierarchy of color names," notes:If a population has a name for red, it also has a name for black and white (but not vice versa), if it has a name for green, it also has a name for red (but not vice versa), and so on.So why would this be true across all cultures? Why wouldn't someone point and something and call it "blue" before they did "red"?-------------http://en.wikipedia.org/wiki/Color_term#Cultural_differencesCultural differencesDifferent cultures have different terms for colors, and may also assign some color terms to slightly different parts of the human color space: for instance, the Chinese character 青 (pronounced qīng in Mandarin and ao in Japanese) has a meaning that covers both blue and green; blue and green are traditionally considered shades of "青." In more contemporary terms, they are 藍 (lán, in Mandarin) and 綠 (lǜ, in Mandarin) respectively. Japanese also has two terms that refer specifically to the color green, 緑 (midori which is derived from the classical Japanese descriptive verb midoru 'to be in leaf, to flourish' in reference to trees) and グリーン (guriin, which is derived from the English word 'green'). However, in Japan, although the traffic lights have the same colors that other countries' have, the green light is described using the same word as for blue, "aoi", because green is considered a shade of aoi; similarly, green variants of certain fruits and vegetables such as green apples, green shiso (as opposed to red apples and red shiso) will be described with the word "aoi".Similarly, languages are selective when deciding which hues are split into different colors on the basis of how light or dark they are. English splits some hues into several distinct colors according to lightness: such as red and pink or orange and brown. To English speakers, these pairs of colors, which are objectively no more different from one another than light green and dark green, are conceived of as belonging to different categories.[1] A Russian will make the same red-pink and orange-brown distinctions, but will also make a further distinction between sinii and goluboi, which English speakers would simply call dark and light blue. To Russian speakers, sinii and goluboi are as separate as red and pink or orange and brown.[2]Hungarian and Turkish have two words for "red": piros and vörös- vörös is a darker red (Hungarian), and kırmızı and al (Turkish). Turkish also has two words for "white": beyaz and ak. Similarly, Irish uses two words for green: glas denotes the green color of plants, while uaithne describes artificial greens of dyes, paints etc. This distinction is made even if two shades are identical.In Komi language, green is considered a shade of yellow (виж, vizh) and it's called турун виж (turun vizh): "grass yellow".---------------D - here is an exciting thought. We can expand human vision into infra-red and ultra-violet now!http://www.livescience.com/5721-therapy-fixes-color-blindness-monkeys.htmlD - the initial application for humans will be to correct male red / green colour blindness.But why stop there? We can gain the colour range of the goldfish!I am curious, once a human can see a full 'octave' (a doubling of frequency) of light, will we interpret that octave like we do music? Humans hear 20-20,000hz (at least before hearing damage). Will we cease to think of purple as somehow close to red?Would it change our colour naming conventions? After all, infra-red will be the 'new red'. Will IRR-R be the in-between unnamed colour, with orange being the next prominent colour?D - I am also interested in the use of polarized vision by humans. After all, if an old person needs to replace their lens via surgery, why not polarize the implant so  they don't need to wear those dorky glasses in 3D movies?http://www.sciencedaily.com/releases/2008/03/080320120732.htmD - the mantis shrimp has the most amazing vision.Some animals can also see in full colour vision even at night. D - I've always thought our society's red / green pairing should have been blue / yellow instead. 1) the colour blind can still differentiate blue and yellow, and2) red pigment signs need to absorb all other colours to appear red. All other colours are more energetic. This leads to the faded, often almost invisible once-red signs. Red is a bad choice.D.