Birthday Cook-up Round Up 1: Pavlova 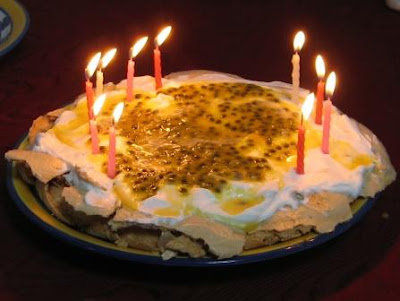 Alright, I confess, the big cook-up I've been on about the last while was to mark the passing of another year in my life and the start of a new one. For the last few years, I've cooked up a storm with an mix of food from different countries. Sometimes old favourites, like ab-gusht, appear on the menu, but more often it's new recipes that took my fancy at the time for whatever reason.

One year, I came across this recipe for pavlova, one of my favourite desserts from Australia, just as I was planning the menu for the big day. Now, pavlova might be totally bog standard in Australia, but I don't think I've ever seen it in Japan, and the reaction of my friends certainly confirmed this. My good friend and blogging sempai (mentor) Lea over at Aloha Mahalo has been kind enough to feature my pavs on her blog a few times (in the second link you will see that the Shoe-Box Kitchen has total counter space as wide as a chopping board is long (g)), and the response was so good she had to translate the recipe into Japanese for her readers.

The ideal pav is crisply meringuey on the outside, and moist and fluffy on the inside. But if you've made a pav before, you'll know that it's a tempremental beast. It can look marvelously rotund in the oven, but when you take it out the next morning (as I tend to do as it has to be left there until it is cold, and overnight is pretty much the only time you can safely tie up the oven for such a period of time (g)), it has shrunk to a shadow of that glorious mound you were salivating over the night before!

Or, you could attempt it in June--smack bam in the middle of the Japanese rainy season--as a birthday surprise for your best mate's hubby, and discover that a crisp, biscuity finish is just not going to happen in all that humidity (why do these things seem so obvious only in hindsight?? (g)).

Anyway, whatever trials and tribulations may befall you, the good new is it will taste great regardless, especially topped with unsweetened whipped cream (perhaps with the addition of some rose water, as I did one time, but certainly no sugar as the pav is sweetness personified) and any tart fruit you can think of (passionfruit, strawberries and other berries and kiwifruit being the favourite choices in Australia). Only don't put the topping on until right before you serve your pav, or you won't get the meringuey crunch that makes a pav.

And on the topic of the origin of this light and airy confection, I find myself swayed by arguments put forth by Bron over at another favourite foodie haunt of mine, Bron Marshall Classic & Creative Cuisine, that New Zealand may hold the honour. Do go and check out what she has to say because even if she doesn't convince you with her prose, at least you can die and go to culinary heaven having seen her lusty and luscious pavlova pictures. Now that's how you make a pavlova!

Incidentally, I have discovered that passionfruits freeze really well in the skin (as nature intended (g)), for thawing out and topping pavlovas at a later date. This might help anyone in Japan looking to make a pav in deepest, darkest February as I do. Passionfruit pickings can be pretty slim at this time of year--unless you want to fork out for a posh one from an upmarket grocer's (g). One or two is enough for me, but go for the 3 in the OR, if that floats your boat (g).

METHOD
· Preheat the oven to 200-210C. Place a piece of baking paper on a baking tray and mark out a 20cm circle (the pavlova will spread a little).
· Beat the eggwhites and salt in an electric mixer until they stand in stiff peaks. Sift the sugar and gradually sprinkle in 1 tablespoon at a time, beating at full speed only until all sugar has been added. Lastly, fold in the vinegar and vanilla.
· Spoon large dollops inside the circle on the baking sheet and smooth over the top lightly.
· Place in the oven (reducing the temperature to 150C) for 1 hour. Turn off the heat and leave pavlova in the oven until cold. If using a gas oven, bake at 150C for 1 hour,
reduce heat to 120C for a further 30 minutes and then turn oven off and leave the pavlova in oven until completely cooled.
· When pavlova is cooled, slide onto a large, flat cake plate and remove the baking paper [S: I find peeling the baking paper off first the way to go]. Don't worry if the pavlova collapses slightly; also expect cracks on the surface. Whip the cream until stiff and spoon over the top of the pavlova. Spoon over the passionfruit pulp or strawberries to serve.
Serves: 8-10

Recipe from The Margaret Fulton Cookbook - revised and updated edition of the 1968 classic.

PS There is no significance to the number of candles on the pav. That was the number of "girlie" ones left over from a box bought for the YM's 13th birthday party.

PPS Photo credits for this go to the YM. I was too busy getting ready to blow the candles out (g).