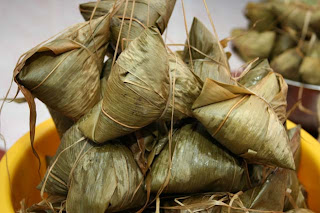 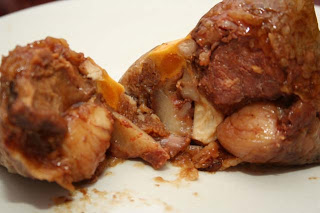 All rice dumplings in Mandarin are called Zongzi.
I'm making savoury meat dumplings. Hokkiens call it Bak Chang, Cantonese call it Harm Yook Joong... other dialects.. no idea I dunno whether this is cantonese style, hokkien or hakka...
But u can check the differences here at this prominent food site in MalaysiaMy grandaunt came from Panyu, Guangdong province made white coloured savoury joongs, with pork, mung beans and mushrooms as fillings. She doens't put salty egg due to $$$, she finds it wasteful to throw away the whites. Hers was damn good, but I never knew how to do the seasoning... No fried shallots and stuff.. but very fragrant and yummy.My maternal grandma of Kwongsi descent, made white joongs with soaked black eye peas and pork. She added sodium benzoate to hers and mom said it lasted for weeks w/o referigeration.When I was in Form 6, during duan wu jie season, a bunch of us will bring a few joongs and a spoon. When it's time for break, we'll open up our joongs, each holding a spoon, will be digging into each other's parcels. It's such fun... The way our mothers did the joongs are quite similiar, except for Yoke Waie's (with peanuts, loads of garlic pips and pork)This is the way I make it.. with marinated pork, precooked black eye peas, fried garlic pips, shitake mushrooms, chestnuts, salted egg yolks and of course, fragrant lightly fried glutinous rice. The fried garlic pips thingy came from eating Yoke Waie's mother's joongs..
It differs a bit from joongs made from other parts of Malaysia, the black eye peas are precooked and seasoned.... It's the way it's done in Kampar, Ipoh and other towns nearby.. but not Kuala Kangsar (which happens to be just 1/2 hr from Ipoh)My Step by Step Bak Zhang recipe
Main ingredients to buy:
1 kg pork belly50 pcs dried chestnuts25 salted duck eggsDried Shitake Mushrooms5 bulbs of garlic600gm black eye peas100 gm dried shrimp300gm shallots2kg glutinous rice 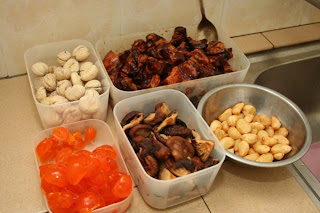 ChestnutsSoak chestnuts the night before.By using a sharp slim object (a small knife or skewer), remove membrane bits in slits.
Salted duck eggsClean egg shells.Seperate yolks from whites.Retain only yolks and cut into halves.
Dried Shitake Mushrooms (50 portions)Soak mushrooms and prepare 50 pieces of it. If mushroom is about the size of an oreo, soaking 25 will be enough. If dried mushrooms are as big as a marie biscuit, 13 mushrooms will be sufficient.
GarlicPeel pips of garlic carefully.Wash and dry garlic.Fry in oil until golden. You may do this using the oil to fry the rice.
Savoury Glutinous RiceSoak Rice for at least 2 hours.Drain rice in a big colander.Finely chop 1 cup shallots and 2 pips of garlic.Heat wok and put in 1 cup cooking oil. (at this point u may fry the whole garlic pips first)Saute chopped shallots and chopped garlic until fragrant and 90% golden. Put in 2 Tbsp salt.Put in drained rice and mix it evenly with the fragrant oil. Add in 4 Tbsp light soy sauce and 2 Tbsp dark soy sauce.
Continue to fry rice until slightly sticky.
Assembly:Mix rice with black eye peas (I prefer it this way to avoid having more of either at the end)

Fold bamboo leave into a cone.

Put in 1 Tbsp of rice pea mixture. Use spoon to lightly press.

Fold in the bamboo leaves.

Prepare all dumplings.
CookingCook in boiling water for 2 hours and remove from water inmmediately while still hot and hang up to air dry for 1 hour. 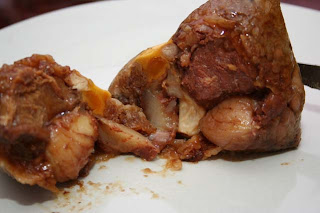