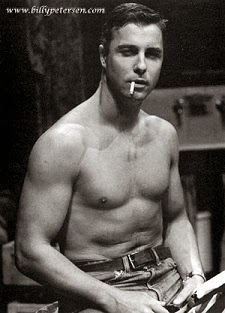 A Streetcar Named Desire, by Tennessee Williams (1947), is probably the most-beloved American play of all time.  It's staged incessantly in big cities and small towns; it's been filmed six times, it's been made into a ballet and an opera.

This seems odd, because it deals with topics likely to make censors nervous: sexual promiscuity, domestic violence, and rape.

Not to mention its strong gay connection. 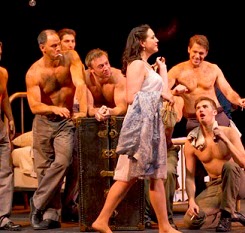 1. Faded Southern belle Blanche is reduced to living in her sister Stella's two-room apartment in New Orleans after losing the family estate. She is traumatized by the long-ago death of her husband Alan, a "poetic" (that is, gay) boy who probably didn't realize that he was gay until she confronted him.  He went out and committed suicide, one of Tennessee Williams' stable of dead gay guys. 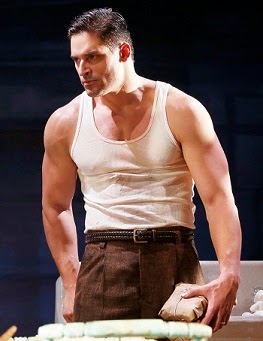 2. Stanley, Stella's brutish, violent husband, has a coterie of male friends who like him...a lot.  Notable is Mitch, who is mother-obsessed and not particularly interested in women (two signifiers of gay identity in the 1950s).  He courts Blanche, but badly, not at all sure what he is doing, and then dumps her when he discovers that she has a history.

After Mitch dumps Blanche, Stanley sexually assaults her, leading to her descent into insanity and famous last line: "I have always depended on the kindness of strangers."

3. Stanley takes his shirt off -- a lot -- most notably when he is flirting with Blanche, and when Stella flees to the upstairs apartment after an abuse incident, and he yells up at her: "Stella!" 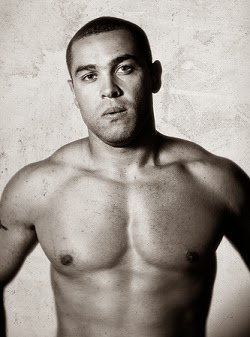 I don't know if Williams wanted to emphasize his raw savagery, or if he just liked seeing muscular guys with their shirts off, but Stanleys from Brando on down, whether on Broadway, community theaters, or college drama departments, have always displayed muscular physiques.  Here are two dozen shirtless Stanleys: 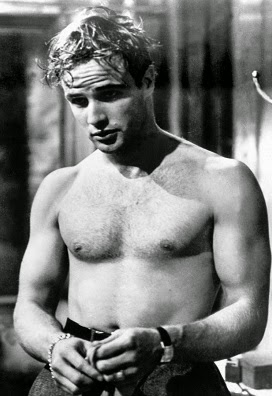 4. Marlon Brando (left), the original Stanley on Broadway and in the 1951 movie version.

6. Stephon O'Neal Pettway in an all-black version of Streetcar at Pace University in 2009.

More after the break 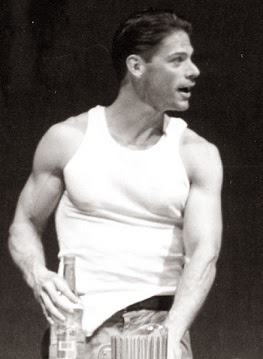 7. Joe Pallister at the Village Theater in Quogue, New York in 1992.

9. Richard Cragun in the 1983 German ballet version by John Neumeier.

11. Rod Gilfry in the Streetcar opera, which premiered in San Francisco in 1998. 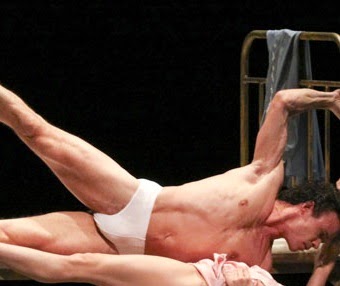 14. Daniel Radcliffe, known for his post-Harry Potter nudity in Equus, is scheduled to play Stanley in London.

Honorable mention: Ned Flanders, playing Stanley in the musical Streetcar! on a 1992 episode of The Simpsons.